Thank you all for your feedback! We appreciate all the time you’ve taken to deliver it to us.

“We’re still working on these but just as a WIP update, we’re pushing some of the tail colors on her chromas to be more differentiated from one another”

Tweaked Ahri's Q trail so it doesn't look so cut off, and added a bit more impact to her W. [Thanks, Kelvin Huynh!] pic.twitter.com/pDl0bjnCnG

One last thing for now – MORE HEARTS on her E. Also more impact, but the hearts are where it's at. pic.twitter.com/Cs8VS7ggue

“Thank you for all of this feedback! Really appreciate it and the team has been going over it to assess changes. Here is what we are planning on doing.

Hopefully this will get to PBE tomorrow”

“Thanks again for all of this feedback! It was a lot to get through but here are the changes we are making.

These should be on PBE tomorrow!”

Look for updated images and videos at the end of the cycle!

* NOTE*: The PBE is a testing grounds for new, tentative, & potentially experimental changes. Be aware that what you see below may be relative to other changes from earlier this cycle! These are not official notes and may be incomplete.

1) Riot Scruffy provided a look at 10.16 balance changes that should be coming to the PBE to test soon:

“10.16 Patch Preview with changes: Not 100% final, but getting close. We have a good meta, so a lot of small changes is our approach to diversify without destroying it.” 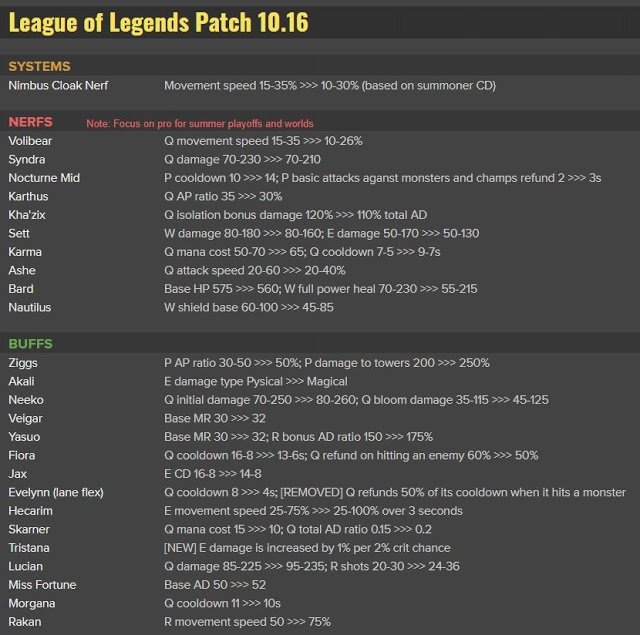 “We are working on tweaks. But we can’t do an entire rework of his walk. The walk is tied to almost every animation on the kit (Because every action has to transition into and out of walk).

First, we are going to modify the thresholds that he uses to transition into running from his movement speed. Second, the current plan is to do something a lot of you suggested, which is to have him sheath his sword after not attacking/casting for a couple seconds. This should help in a lot of cases where you “notice” the walk (like just moving around the map while not actively fighting people).

We MIGHT not have changes in before we have to push the build to live for this patch, and not everyone is going to be happy with where we end up of course. But we will do the best we can. Thank you all for the feedback.”