“Shout out to the team for putting together this sick new feature coming to 10.16:

You’ll be able to right click any item component and see what it can build into. It even highlights what you can make based on what items you have ready to go!”

*NOTE*: The PBE is a testing grounds for new, tentative, & potentially experimental changes. Be aware that what you see below may be relative to other changes from earlier this cycle! These are not official notes and may be incomplete.

“Hey Yone players, just wanted to give you a quick update on the walking animation.

First off, thank you for all the feedback. We are lucky to have so many players jump on PBE and watch streams to give us their thoughts before Yone hits live. We heard your concerns loud and clear.

I wanted to provide some insight to our current thought process, constraints, and what we plan to do next.

Adam (Yone’s animator) has put in a lot of work over the last couple of days exploring the options we had available to us when it comes to this animation. A champion’s walk is deeply rooted throughout a kit. Almost every animation needs to have supporting animations handle the transition to and from the walk. Changing the core of this animation means having to alter every other animation to support it. That said, I don’t think we would want to do that anyways. We tried testing a few animations where Yone sheaths his blade when running, or even dismisses his Azakana blade to move more quickly. But these animations didn’t feel like they fit Yone’s character.

Yone is supposed to be different from Yasuo. And different from most other champions. He is calm. Calculating. Precise in his decision making and movement. He also knows how crazy powerful he is. And some enemies take no effort for him to defeat. We think that his current walk can have an imposing and intimidating feeling to it when he is in combat with others. (Kind of like: “I don’t even need to break a sweat to absolutely demolish you”).

All of that being said, this type of stance/walk doesn’t really make sense when Yone is not actively fighting. Especially in moments where the player is just trying to get from point A to point B. Who exactly is he trying to intimidate? Why does it look like he’s taking his sweet time? Why is he so rigid when he should probably be hustling to get to his destination? This is where we agree with you 100%. It doesn’t make sense for any character. Especially Yone, someone who is capable of great speed and agility when he needs it.

Our current plan is to make tweaks to the run animation to better match your expectations and feedback: Leaning forward, less rigid, and have Yone look like he is ready to spring into action at a moment’s notice. We will also have him transition into his run animation when he has not been attacking for a few moments (Similar to how/when Yasuo sheaths his blade). We think this keeps the thematic of Yone in-tact while resolving a lot of the dissonance players are feeling.

Unfortunately, we won’t have time for this to be on PBE, but you should see a polished version when Yone hits live.

Once again, thanks everyone for your feedback and your passion towards Yone. Please keep it coming! Can’t wait to see you on the rift.”

“We actually just got sign off today to make updates to the VFX on SB Yone. They will not make it in for live, but should come out with the following patch.”

“It will mostly be focused on Q3 (Warning tornado on Yone, Q3 missile/dash). We are also going to try and make improvements to the E execute icon above enemies heads for both skins to make it more visible/readable.”

2) Riot Scruffy provided a look at 10.16 balance changes that should be coming to the PBE to test soon:

“10.16 Patch Preview with changes: Not 100% final, but getting close. We have a good meta, so a lot of small changes is our approach to diversify without destroying it.” 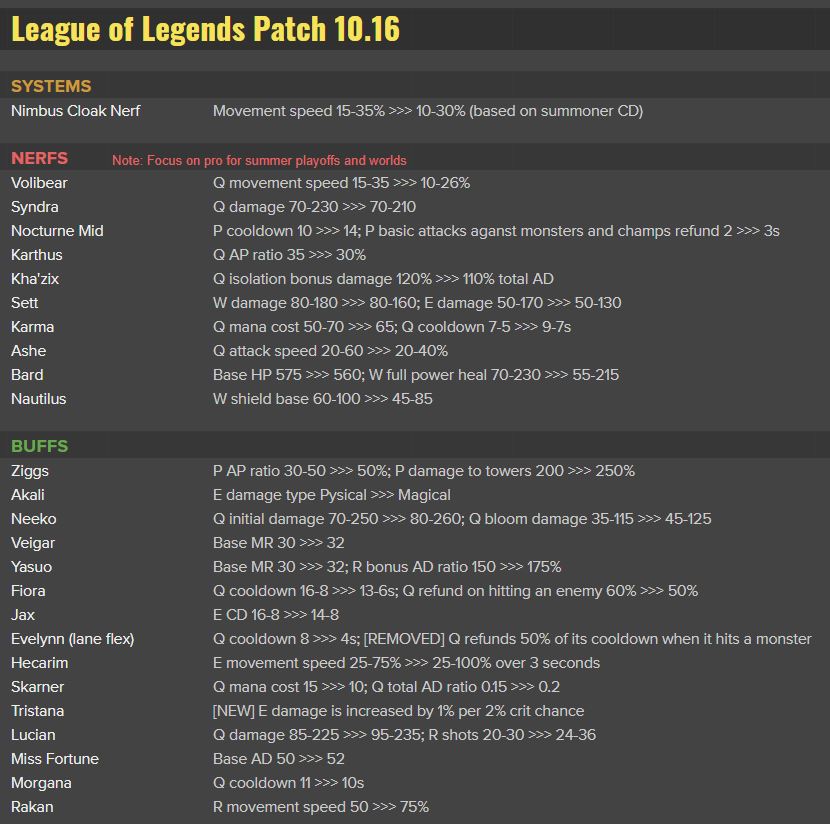