ADRs, or marksmen, are ranged damaged dealers. While they do a lot of damage once they’re fed, they are very squishy. Also, if they’re not fed, they’re usually useless in the game. This is a guide to help you throughout the laning phase, so you can get fed and dominate in team fights.

Early game is when players try to get gold. Players are also looking for experience, which levels up champion skills. This can happen in one of two ways: CS-ing and killing an opponent. As with any phase in the game, you have primary objectives. The most important ones in this phase are:

Getting enough CS in the early game your main priority during laning phase. Ideally, you shoulud have 200 CS at the 20 minute mark. A lot of marksmen have problems in CS-ing, and there are a couple of factors that contribute to this:

A good tip to is that you can also try and deny the enemies their CS. Whenever they come in for a CS, look for opportunities to harass them and make them back away.

The main thing to remember about the laning phase is that your main objective is to get CS. If your jungler ganks your lane effectively, or if your support makes an opportunity for a sure kill, by all means take it. However, you should always focus on last hitting.

Getting an early kill most definitely comes in handy as you get that early advantage, but make sure to look for safe opportunities. In this situation, the enemy is alone, low and is a melee fighter. I know that they have no jungler. Since I have significantly more health and a ranged autoattack, I see an opportunity. 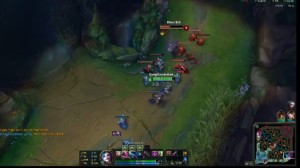 Here, he gets a little too close to me.

So as Jinx, I place my chompers behind him, where I’ll expect he’ll go to escape when I get aggressive.

I then use my autoattacks to get his health low, and as he tries to get away, he gets stuck on the chompers. 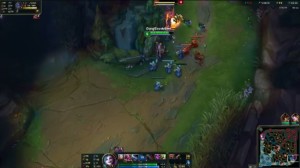 At this point, he has no ADC to back him up, and I get a free kill. 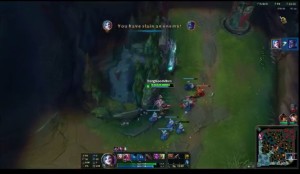 Notice that I kept CS-ing as I was trying to wait for an advantage to kill him.

Knowing when you’re about to enter mid game

It’s important to recognize when mid-game is about to start. Once a tower has been taken down in any lane, champions are much freer to visit other lanes to help their teammates take down turrets. Most players have gotten past level 6 by this stage, if they’re not too far behind. This is also usually the time when teams secure dragon.

An important part of this stage is warding. If you still have your first turret up, it’s best to ward the tri-bush and the bush at the entrance of the jungle. One of the worst things I’ve seen ADCs do is not ward at all and expect junglers and support to do all the vision control. The whole team should be warding. Vision allows you to know when the enemy team is coming to gank, or if they’re trying to secure an objective.  Here are the important places in this stage where you should have wards:

The river entrance should always be warded. Your enemy support or enemy ADC might be hiding in there, waiting for an advantage. It also allows you to see if the enemy jungler is looking for a gank. 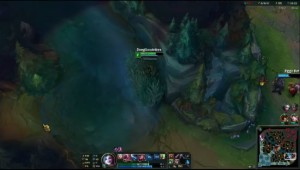 The tri-bush area is an important place to ward, since enemy champions will be roaming around, trying to help their teammates secure objectives.

As an ADR, your goal is to secure objectives and to deliver damage to enemy champions. An important objective is the Dragon, so you’ll have to have vision there as well. Getting your wards down early helps, because you could go in for a sneaky dragon steal. It also helps in general to know what your enemies’ objectives are without them knowing that you’re in the loop.

Lastly, ward the river, right in front of the dragon. This tells you when an enemy is on his/her way to gank your lane. To save on wards, you can also kill the Scuttler, as it provides vision. In the cases where enemies have gotten the Scuttler advantage, just place a ward there.

If you’re playing against Teemo or Akali, Pink wards are definitely your best option.

Working with your team

You’ll be amazed at how much communicating well can up your odds at winning a game. One notification that the enemy is missing in lane could prepare other lanes for a gank. If you say you’re on the way to a lane, your teammate will better know how to prepare or create a good opportunity for kills and objectives. Work with your support so you can recognize when he or she’s creating an opportunity.

However, communication is easier said than done.

We’ve all had that game with that one player who just has a negative attitude. Whenever the player dies, it’s the team’s fault. This player is called the Rager. Maybe he’s had a few bad games, or is just having an unpleasant day in general – it doesn’t matter. Any League player has also experienced a team that just refuses to communicate completely. In these cases, the best you can do is try to stay positive.

Sky Williams gives a lot of good tips on working as a team in this video:

Working as a team is especially important as you end the laning phase and enter mid game. In the next tutorial, we’ll talk about how to successfully transition into mid game. It will also cover how you can use your advantages from early game, or how to come back from an unsuccessful laning phase.