Back at it again: Team One announces their new AD Carry

Alongside with Olleh (former Immortals support), Lactea played for the Brazilian Pain Gaming in the past. Rumors say that Koreans always underperfom in Brazil, will Lactea prove this wrong?

The newest Team One’s member didn’t pronounce anything just yet, but there is a lot o hype around this announcement. And Although Pain Gaming did not perform well enough to claim the CBLoL Trophe in 2014, Lactea still had an outstanding performance throughout the whole championship.

Now he is back on Team One, will he be able to claim the crown this time?

We are pleased to announce today our new AD Carry! We invite Korean with a Brazilian heart, Lactea, to wear our golden cloak and show everyone that #TheONEisComing!

The shooter who accumulates tickets for Pain Gaming in Brazil and for Midas, Roar and Showtime on the international scene, comes to add the whole experience that has the boldness of the golden cast.

We ask that #TorcidaDourada welcome the new Golden Boy, and show that even on the other side of the world he can really feel at home!

Throughout the Course of Four Years, Lactea has been in 5 Teams in Total,  his debut was in the Korean Midas FIO, where he stayed up until 2014.

Finally, on the beginning of 2014 he was announced on Top Lane by the Brazilian Pain Gaming. After some time though, he would replace ManolinGuilder on Bot Lane and become the AD Carry alongsidea with Olleh. On Pain Gaming, Lactea disputed the Brazilian Champion League 2014 and the 2014 Season Brazil Regional Finals.

Later in 2014, Lactea would be announced  as the AD Carry by the Chinese Team Roar,   where he stayed for only one month.

After some time, Lactea went to another Chinese Team, ShowTime. However this Team was disbanded later on.

Lactea has made it to the top of the ladder several times in Brazilian Solo Queue, As a result he was considered one of the best players to ever play in the Brazilian scenario. 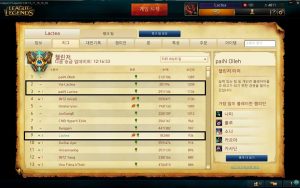 It was no different in Korea, Lactea made it to Rank 2 in 2015, being behind Faker only.

Hype Around the Notice:

Of course, Brazilian fans got hyped up. The announcement made by Team One eSports on Facebook received over 29.000 views, many likes, comments and shares.

Question is, will the new reinforcement be enough to help Team One’s performance on international tournaments? Let us know what you think  in the comments!