When Blitzcrank’s on the Rift, enemy champions play safe. As most League players will know, one successful grab from Blitzcrank could mean instant death.

This is a guide on a technique that applies to most tanks. If you’re playing Blitzcrank and want to use this technique, you should definitely get the recommended tank-support items. Also, when using this technique, keep in mind what your ADC can do, so you know how to play it off to the best of their abilities.

Whenever Blitzcrank’s health goes as low as 20%, he acquires a shield which protects him from damage worth 50% of his current mana. The shield lasts for 10 seconds, and has a cooldown of 90 seconds. This ability is a great tool to bait enemies. When they think you’re low, use your W to move away while your ADC continues to deal damage. It’s also a good idea to use a health pot when your passive starts, so you can secure a safe escape. 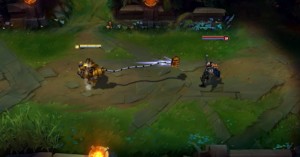 This ability is what makes Blitzcrank so formidable on the Rift. One Rocket grab at early game could mean a fed ADC.

Blitzcrank extends his hand rapidly and grabs the first enemy or enemy minion it hits. He then pulls the enemy towards him. His Rocket Grab stuns the enemy, and deals magic damage.

What’s tricky about this skill is that it also grabs enemy minions. A common tactic when playing against Blitzcrank is always making sure that your champion is standing behind minions at all time. 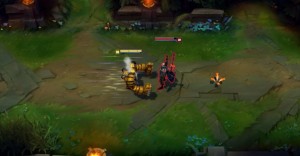 Overdrive gives Blitzcrank a movement and attack speed boost. This could be used for baiting enemies or escaping from danger when you’re low on health. It can also be used to move around minions and hook enemy champions. 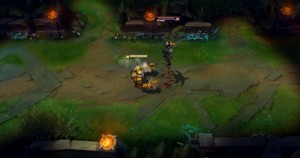 Blitzcrank attacks his target with double the damage and knocks them up in the air. This is very helpful after a hook, as you can prolong the time you and your ADC are doing damage to the enemy before they run away. 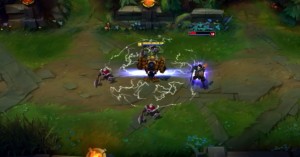 This ability lets Blitzcrank fire lightning bolts at enemy champions at a certain range. This damages enemy champions and silences them for 0.5 seconds. This is very useful when it comes to teamfights, as enemies are unable to use any of their abilities for a short while.

Now that we have the basics, it’s time to put them all together to perform an opportunity for your ADC to get a kill.

Let’s say there are a lot of enemy minions behind your priority target (in this case, the enemy ADC). All you have to do is trick your enemy into attacking you, forcing them to move outside the safety of their allied minions. Since Blitzcrank is also a tank, he can take a bit of damage, and escape with his passive.

In this example, I’m hiding behind a brush. Thresh has warded the brush beforehand, and know’s that I’m hiding in there. 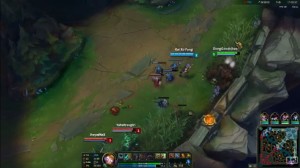 This makes me an easy target for him, as it was the early game and Ashe could have easily killed me. I knew he would try to hook me, and he did.

As he hooked me, his ADR (Ashe) went in for the kill. As she did, she moved away from her allied minions.

At this point, Ashe probably realized that her positioning wasn’t very safe, so she tries to movie away. It was too late, though, as I was able to grab her..

And pull her to my ADC, who immediately responded.

Afterwards, I was able to use Exhaust on her, slowing her down and reducing her damage.

The important thing to remember here is that you should always make sure that you can sustain the damage. Otherwise, you’ll end up getting killed while baiting. Make sure that you have your W to escape if you’re in a bad spot (or to chase down an enemy if he gets away). Remember your passive: it’s solely based on the mana you currently have, so make sure you have enough mana in case things go bad.