The new feature promises to provide a thrilling and intense competition as well as Deliver real rewards. “Clash” will introduce a brand new experience to players who love to compete; There will be Team Brackets and the more you advance in the competition, the better your rewards will get. Not only your rewards will get better, but obviously, the teams you that face off as you advance in the brackets will also get a lot better, which contributes even more to a full competitive experience. You’re probably wondering

What is Self Mitigated Damage?

Before the match starts you will have a short window of time called Scouting Phase where the game will show you statistics about your opponents; such as their most played (and most successful ) champions as well as the champs that they played recently in Clash. 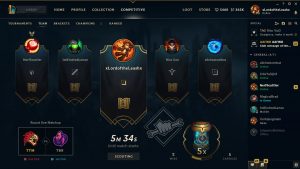 The ban-system will be just like what you have seen in the professional competitive play; Split Draft consists of each team banning three champions first, then picks three. In the second phase, each team will ban two more, then pick two.