Damwon Gaming have entered a tie for first place in the 2020 LCK Summer Split standings following a crucial 2-1 victory today against Gen.G.

This was a highly-anticipated matchup since both League of Legends teams have looked solid over their past few games. While Gen.G had some sloopy wins here and there, Damwon have mostly looked unstoppable—and they showed all their might this series.

The first game was the Canyon show. Damwon’s jungler farmed well, roamed everywhere, and ensured that his team secured all possible advantages around the map. His pressure was so high that he ended up topping the damage chart out of all present players in the game.

Canyon was the decisive factor in Damwon’s wins. He received both Player of the Game awards for games one and three. He put on a good show in the first game with Nidalee, the champ that he used to pick up the first pentakill by a jungler in LCK last month. He ended the game deathless with a 5/0/3 scoreline.

The second game was the complete opposite of the first one, though. Gen.G picked up the slack and delivered crucial blows in all lanes. The only player on the team with two deaths was the jungler, Clid. Both deaths were worth it, though, since Gen.G picked up crucial objectives in the process.

Although Damwon’s mid laner Showmaker tried to put a stop to Gen.G’s efforts of equalizing the game, he was left alone in the desert since all of his teammates died too much in every lane.

After a lackluster second game, Canyon turned things around for the final showdown with a last-round Karthus pick. The champion fit Damwon’s composition perfectly and Canyon was able to secure leads everywhere on the map.

His presence was felt by all of Gen.G. Canyon had 100-percent kill participation toward the end and a 5/3/11 scoreline. 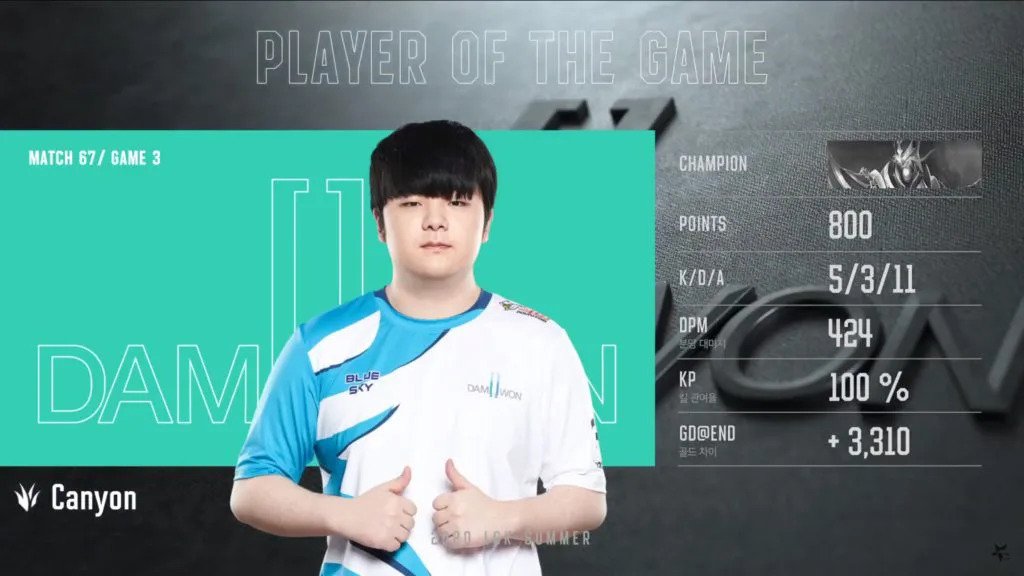 Damwon’s next match should be an easy series against SP on Saturday, Aug. 8 at 7am CT.