The regular split is over for Dignitas, but the 2020 season might not be.

Dignitas needed a series of small miracles to make the 2020 LCS Summer Playoffs coming into this week, and they got the first of those with a last-ditch win in their final regular split game to keep their season alive.

It was a tense, 46-minute affair that ultimately was decided by a Baron play that, despite being won by 100 Thieves, was played around expertly by Dignitas. Omran “V1per” Shouran’s constant split-push threat on Camille never abated, and the oft-maligned top laner stole the game from the Thieves with his team delaying 100 Thieves’ recalls from Baron and stalling any sort of contention just long enough to give Dignitas the win.

Dignitas’ ADC Johnson “Johnsun” Nguyen added a feather to his cap in an already impressive individual split as a homegrown rookie. His Ezreal got off to a scorching start and played very intelligently, demonstrating smart positioning and good teamfighting.

Caitlyn has also seen a ton of priority lately, and 100 Thieves ADC Sun “Cody Sun” Li-Yu had a deathless performance despite the loss.

The regular split is over for Dignitas, but the 2020 season might not be. They, along with Immortals and CLG, are fighting for the eighth and final playoff spot, and if Schalke 04 has taught us anything from the LEC, it’s that miracles can happen. Fortunately for Dignitas, their way in is very possible. 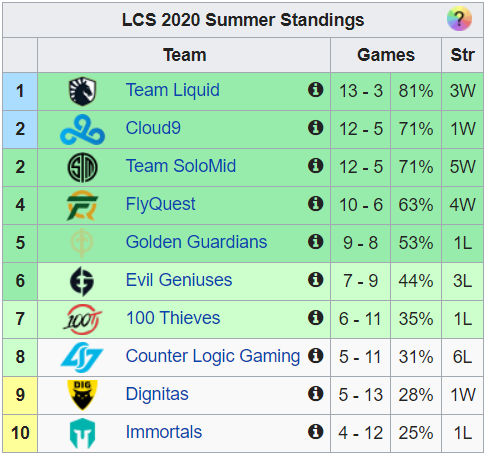 Immortals have to play Team Liquid and FlyQuest, and CLG have to play Cloud9 and FlyQuest without Pobelter, their best player. If these stars do align, CLG and Dignitas would play a one-game tiebreaker for a spot in the playoffs, and the direction of the momentum for these two teams could not be going in more opposite directions.