A few days back, League of Legends Twitter released an update teasing another champion rework. With the tagline “The Hour of Need”, and the teaser picture used, one cannot help but be intrigued by the upcoming rework for Galio. 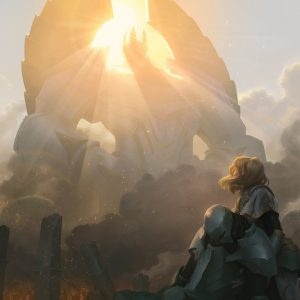 This is a rework that has been way overdue. For years, the Sentinel’s Sorrow has failed to solidify a spot in the competitive metagame. Galio can be considered a legacy champ that is already long overdue for an update. He was created with the mindset of a tanky anti-mage champion that can double as a support/mage, made evident by his kit. His passive rewards him ability power for building magic resistance. His actual skill set is not so bad on paper: Two skillshot attacks that provide utility by manipulating movement (and a surprising amount on burst damage on one) and a buff that provides armor and magic resistance. Galio does have a flashy, explosive mass-CC ultimate in the form of a large-AoE taunt.

Unfortunately, Riot has long moved on from those design ideas. In this game that has now been affected by mobility creep and an abundance of abilities that outright perform Galio’s job better than him. Galio has melee attack range, has short range on his damage spells, and has been stuck with an ult that can now be easily avoided or countered by several champ with CC on-hits such as Udyr, Xin Zhao, and Braum. Even his passive is too situational to be truly reliable in general scenarios. To make matters worse, in those years that Galio floundered in obscurity, several champions have laid claim to the “anti-mage” title and performed in a far more effective manner such as a huge variety of assassin champs that primarily play mid lane.

Truly, Galio’s kit has not aged well. Even Riot has acknowledged it for half a year already on their State of Champion Update.

Why should we be excited?

For this rework, we can expect a huge change. Such has been Riot’s philosophy in their recent reworks so far. One needs to look no further than Warwick, Sion, Poppy, Yorick, and others. All of those champions have been retooled with a practically new kit as well as new appearances and textures as part of their update. If there’s anything to be really excited about, Riot said in their post that Galio is going to be the largest transformation to date.

Would this bring the mighty gargoyle towards competitive glory in Summoner’s Rift? We can only wait.