LCK Playoffs: SKT Demolished by KT Rolster in a Bo5

by LoLNews
in eSports, Match Analysis
0 0
0

SK Telekom, for the first time in esports history, has failed to qualify for the MSI. SKT had a rough Spring Split this year. They’ve managed to only finish 4th in the group stage of the Split. They won half of the games (9W, 9L), which was unseen in previous seasons. Even though they qualified for the Playoffs, they were not good enough to beat the rising stars of KT. This season’s competitors in the Korean Championship have greatly increased the standard of the game. While this is not good information for the loyal fans of SKT, it is stimulative for the overall quality of the competitive scene.

In a series of Bo5, SKT has managed to only win the first match. KT Rolster won the rest of the matches, with a final result of 3-1. Let’s briefly analyze each match.

The first game began with pressure from both sides. The game went even up until the 20th minute and KT Roster even gained a lead of two towers and 2.5k gold at one point. However, at the 21st minute of the game a fight broke out in the mid lane from which SKT managed to take two kills and the Baron. After this, SKT snowballed fast and Bang, who played Tristana, got fed to the point where he singlehandedly carried the game.

Full stats and a video highlights of Match 1: 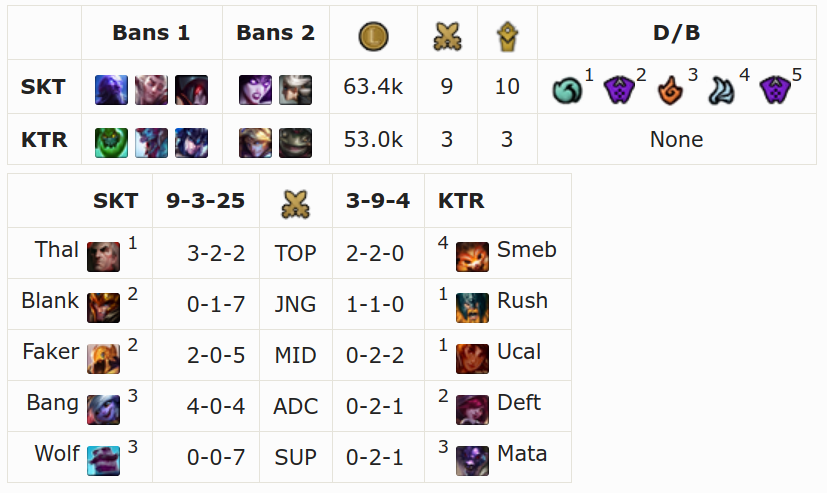 The second match began with Score’s Olaf getting an early kill in the jungle on Blank’s Jarvan. KT Rolster picked early game champions in the Pick’n’Ban phase and used this early pressure to gain advantages across the map. With three mountain drakes, secured by Kalista, they succeeded in getting two Barons and melting SKT’s towers in each of the three lanes. Blank, SKT’s jungler severely underperformed in this game, which lead to a bunch of memes showing up in the post-game discussions on Reddit. He dived KT’s team at least three times, which costed SKT free turrets and eventually the game. 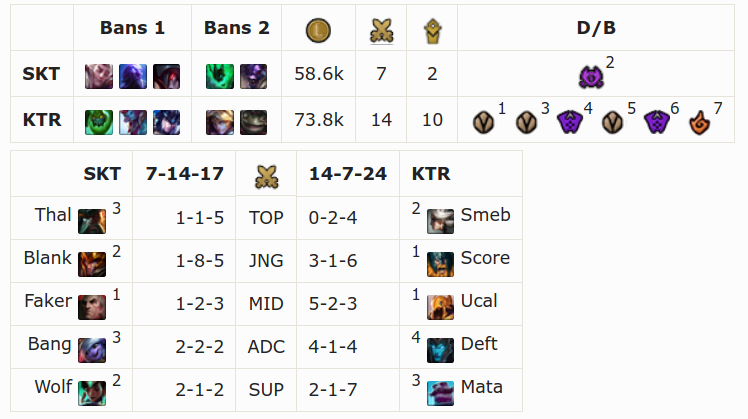 In game 3 we saw the first appearance of Renekton in the Spring Split in the LCK. However, this was not enough for SKT to get back on track. Early roams from Ucal to the top lane have put SKT’s Thal so behind that he was unable to get back in the game. In the early game, Score and Mata pulled out a spectacular combo with Thresh’s lantern and Scarner’s ultimate, giving them space for snowballing. You can see this amazing coordination in the 9th minute of the game (0:30 of the video highlights). 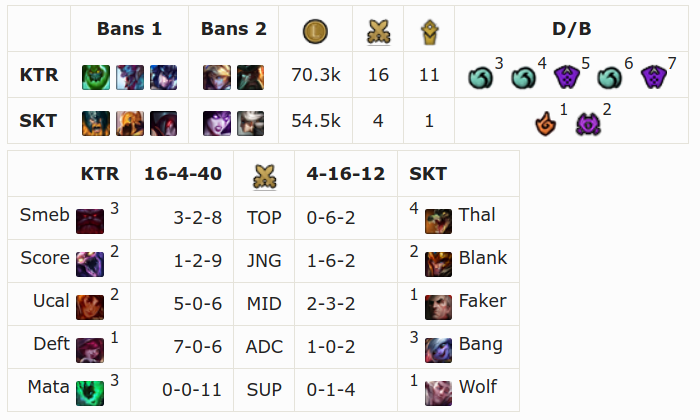 The last match only concluded SKT’s downfall. Even though this game began in favor of SKT, they did not succeed in turning the small lead into a victory. The combination of SKT’s indecisiveness and Blank’s hideous performance put SKT in the shadow of KT Rolster’s mid and late game domination. 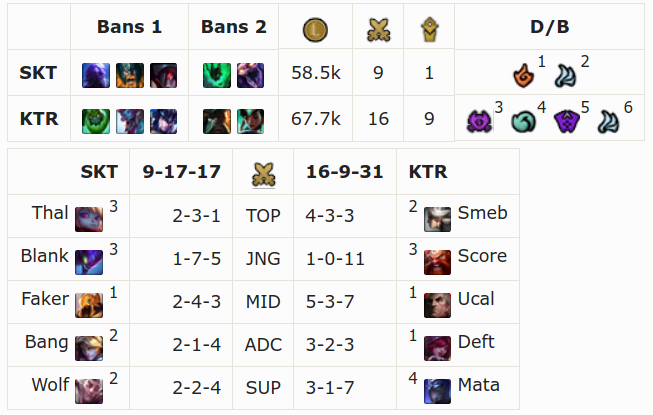 Doublelift to play the NA LCS finals, despite recent tragedy