This patch, we’re looking in on bot lane, where shorter range champs like Samira have been slashing, dashing, and bashing things up. This hasn’t gone unnoticed, which is why Samira’s an especially hot potato: although her win rates are fine, her ban rates are high— so we’re hoping these changes will help make her feel less frustrating to play against.

Speaking of slashing, we’re also adjusting Katarina (and Urgot) to revitalize their on-hit builds, which were hit hard hard by our changes to Kraken Slayer. Other folks on the buff train due to item changes include Fiora and Lee Sin.

And if this patch seems particularly buff heavy, it’s because we also took a pass at bringing down the jungle’s overall power. With less rewards from camps, games should feel less dictated by the strength of the jungler. Now, you can share your fruits of victory (or defeat) equally with your teammates!

One more thing: there’s no new skins in this patch. 11.5 will bring with it some goodies, and it’ll be… sweet!

The festival continues in the TFT world with an all new remix. Take this portal TFT patch notes to check out the changes 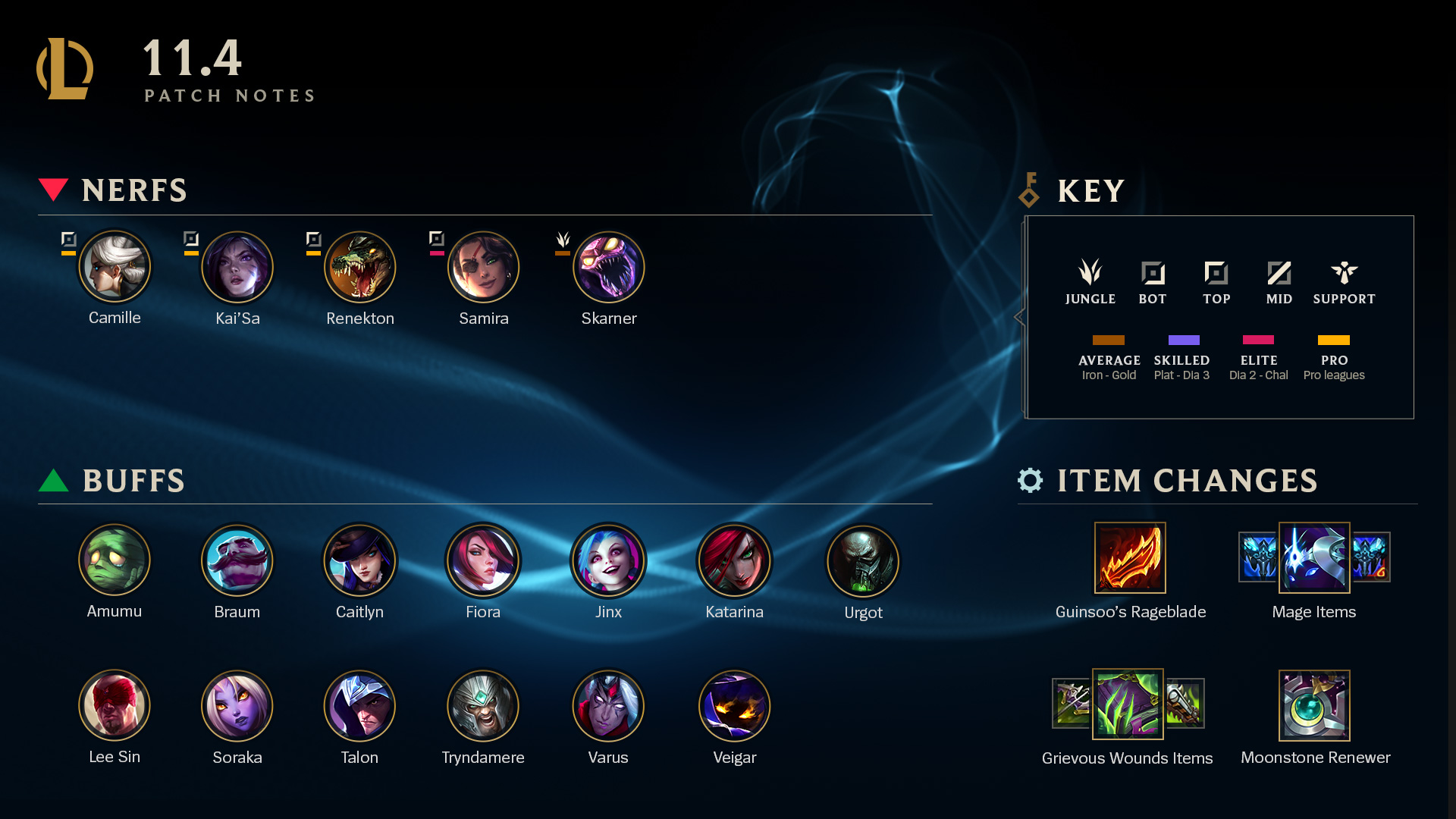 The pal of the poros is getting more chances to activate his high-agency, high-impact ultimate to help turn the tides of a teamfight.

Caitlyn loves a good chase, but she’s too far behind to be a reasonable counter to shorter-range marksman champions like Kai’Sa and Samira, who are currently running the meta. Reverting some previous nerfs (patch 11.2 and 10.19) to set her back on the trail.

Camille’s been sweeping out her enemies top lane in Elite and Pro play, so we’re reducing some of her safety and durability in lane.

The new itemization and changes to fighter items (patch 11.3) left Fiora in a weaker state, so we’re sharpening her blade.

Jinx is back! Her win rate seemed to go down in higher levels of play, suggesting that the 11.3 base health nerf was skewed too high.

No one adapts to new items like Kai’Sa, and this season proved no exception. We’re reducing some of her damage to lower burstiness and make her less daunting in quick trades early on.

After our 11.2 adjustments to make Kraken Slayer work with on-hit damage modifiers, champs like Katarina and Urgot are in need of some tuning. We’ve noticed that players really enjoy playing on-hit builds with these champions, and even if they’re not on-meta, we believe they should be viable. Prior to the Kraken changes, a significant number of Katarina’s and Urgot’s builds were on-hit, but they also had significantly lower win rates in comparison to their traditional build. These changes should bring those builds up to roughly where they were before.

Lee’s also been struggling with the new items, and could use some buffs to push him towards his visions of zooming around the map.

Renekton is a strong croc who can propel through lanes with high sustain, so we’re paring some of that down.

As it stands, our desert rose has consistently been warming the ban bench. Even when technically close to balanced, we believe she has several frustrating attributes that contribute to her high ban rate. We’re tackling this problem by giving her some balance tweaks so that both Samira players and her opponents feel more comfortable having her back in the ring.

To do this, we’re reducing the power of her defensive tools and giving opponents more opportunities to play against her in lane. We’re also reducing her all-in potential early game. In exchange, we’re improving her kill potential mid to late game, so that when she does go in, she slays.

removedALLY TARGETING Samira no longer dashes through allies
newEYE ON THE TOWER Samira can now dash through enemy towers, but will target champions over towers
DASH SPEED 2050 ⇒ 1600

Base health and health growth decreased.

The last of his kind is the top of the jungle. Pulling back a bit of defensive power so Skarner can rest his weary claws.

Another sight for sore eyes, even with our last set of buffs in 11.2. We lend our aid to Soraka.

Talon has been struggling to get his blades on people, so we’re letting him have some more access to his tools at range.

Tryndamere’s been weak in lane, so we’re bringing our furious fellow’s base AD up to help him out.

We’re giving more incentive for Varus to fully charge his Q in combat. Extra juicy for lethality and crit builds.

Veigar has fallen a little short of other mid laners in 2021. Giving him a boost so he can stand face-to-face with the competition.

Guinsoo’s has fallen behind crit itemization for a bunch of champions who historically had more choice here. Giving it a slight bump so it can be a more meaningful consideration.

Moonstone is crowding out choice and generally overperforming, especially when purchased very early and starts snowballing. We’re reducing some of its early healing power.

While Grievous Wounds are meant to be a reactive purchase, they are performing below expectations. Buffing their stats a bit so that the tradeoff between other Legendary items is less sharp.

We’re changing a couple of the under-purchased mage items so they have more opportunities to shine. Cosmic Drive’s passive is now more accessible, while Everfrost now has a new build path and a few small buffs.

We’ve seen junglers have a bit more control over games, in large part due to their increased purchasing power early game turning into combat stats, which then accelerates their experience and gold growth. We’re pulling back on their experience and income a bit to compensate. As a result of these changes, we’re holding off on nerfing some borderline OP jungle champions until we see how these changes shake out.

After seeing the incoming healing tech live for some time, we’ve come to a few conclusions: Incoming healing is very satisfying for the player using it and their allies, but it can hurt clarity around how much health enemies have in tense combat situations. We also found that when combined with shields and grey health, the stacked bars could be a bit confusing. We’re making a few changes this patch to address this, and we’re planning to roll out the tech to more systems in the future (i.e. health potions and Mundo’s ultimate).

More updates so you can wipe out the store and the competition.

Alongside the Clash 2021 Season VP track starting in 11.4, you will see the second iteration of our Build-a-Team feature in Clash. This version will allow players to find and request to join teams that are looking for more players to fill out their roster. This should help turn your roster of 3 or 4 players into a 5 person meme dream team to crush the Clash tournament with.