Now you have an opportunity to get a “degree” for your style of playing. With Champion Mastery everyone will see your experience level of playing a champion. There are grades from where you will be ranked as a excellent, average or a bad player of concrete champion.

For more detailed recap, read below…

We want to recognize you for playing the champs you love and give you feedback on how well you play them.

“With Champion Mastery, you now get points, ranks, and rewards for the champs you play. Now, if you want to show other players that you’re a dedicated Swain main, or a big cheese with Twitch, you can!

HOW THE SYSTEM WORKS

Finish a game of League and you’ll earn points for your champion based on your team’s performance as well as your own contribution. Earn enough points and you’ll level up that champ’s mastery level, giving you rewards as you progress.

Hover over your Champion Mastery points bar in the post-game screen and you’ll see the grade that our new system gives you. Grades are awarded based on your overall performance in the role along with the champion you’re playing and, crucially, where you’re playing them. 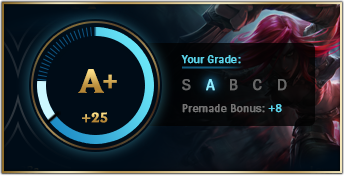 Check out your in-client profile, and you’ll see a new stat telling you your mastery score, a sum of all your mastery ranks combined. 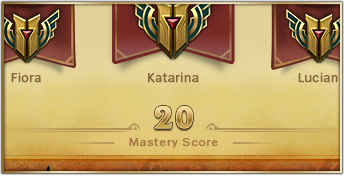 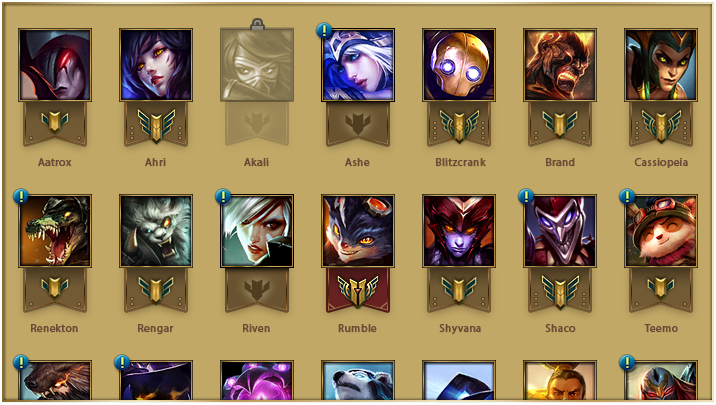 We’re kicking off Champion Mastery with the first five ranks for each champion unlocked. Here are the crests your champion will earn as they rank up:

We’re kicking off the rollout with a PBE stint from 3/11. If all goes well, a couple of weeks later we’ll then launch a beta in a single region, focusing on Summoner’s Rift normal queues to make sure the feature’s stable for expanded use. We’ll read through your feedback and keep you updated with our progress, too, so keep an eye out for future posts after the service goes live!

All summoners who’ve hit level five or higher will be eligible for Mastery points. However, at launch, it’ll only support normal games on Summoner’s Rift.

This is just the beginning for Champion Mastery. As the system matures, we’ll unlock extra tiers and rewards as we build on the program! ”

As for who will be able to see mastery badges on the loading screen, Riot Mixtli noted:

“Team only. Same rules as Ranked banners on loading screen.”

Socrates also added that team mates will not be able to see your end of game grade:

“You can only see your own grade so other players won’t know if you scored poorly.”

Riot Mirross also chimed in, confirming grades will not be available to third party sites:

“No, this won’t be available to third party sites. We want the grades to be feedback for you, not something for others to be able to see.”

Socrates also noted that all positions are treated equally when figuring out the grade:

“All positions are treated equally. If you’re running a Jax / Poppy bot lane (or some of those other crazy combos) you’ll be measured against similar players when we give you your grade.

We aren’t giving players an explicit breakdown of their performance in all the categories we consider for launch, but maybe some day.”

He continued, elaborating on the point system:

“CP is determined using a combo of personal score, teammate scores, win or loss, game length and a few other factors.

We weighted scores in this way for a few reasons. We didn’t want to put too much pressure on players to perform individually really well at the cost of teamwork. Also we want wins to be more valuable than losses so it’s not possible to faceroll a champion to max level easily. That said I can see how not getting as many points for a loss could feel a little bad. Ultimately it’s a trade we have to make to align incentives properly in the system but it’s something we’ll keep an eye on.”

When asked if the system will be retroactive and count games played before it’s launch, Socrates noted:

“We aren’t planning on retroactively giving out rewards at launch since progress is driven by performance.”

As for if you can lose mastery on a champion, Socrates noted:

“There are no demotions planned currently. This isn’t intended to be a ranked system in the same sense as leagues. The grading system does give players an idea of how they are improving with a champion via the per game performance evaluation. Also, performance and winning or losing does dramatically affect gains, so a high performing player will unlock rewards much more quickly.”

Over on reddit, Socrates talked more about the system and how it ties to “mastering” the champion:

I am discouraged by this because it doesn’t really show “mastery” of a champion but rather games played. Riot said that there isn’t a demotion mechanism and basically if you play enough, no matter how bad you are, you’ll become a master of a specific champion.

Ranked is the only system that gives players explicit feedback that they are improving atm (and sometimes not improving). In reality, every game you play you are typically improving to some degree. We want this system to fill that gap with a combination of the grading system and progression system. The grading system is percentile driven – so earning a high score means you performed in the top x% of players on that champ in that position. The grade governs the point gains. Ultimately we want a feedback loop that feels meaningful and if we don’t feel like we’ve achieved that we will reevaluate.”

“It’s percentile driven based on your champion and position. So based everybody who played soraka support, if you played in the top x% in your current game you’d get that that score.”

As for the rate at which you gain levels, he commented:

“The levels themselves will be pretty achievable on any given champion, but not trivial. The high grades are hard to earn. The only players we consistently saw getting S+ were pro level.

There is also total score, which is the sum of all your levels on all your champions, that will be really hard to reach max on.”

When asked what happens after you reach the maximum tier, Socrates noted:

“We don’t want this to be a grind, it’ll be way, way less than 500 games to max level. That said, after the levels stop you can continue to earn points, the total of which you get to show off in your profile. So if you wanted to go that deep on Shaco you could.”

When asked if this feature will only be for Summoner’s Rift, Socrates noted:

“For launch it’ll just be SR. May go to other modes at some later point.”

As for bot games, he continued :

When asked about including summoner icons as a reward from Champion Mastery, Socrates noted:

“We considered this. We kind of use summoner icons for everything atm so we wanted to branch out with this system.”

“There probably won’t ever be skins associated with this system, but we do have some other ideas we think you guys will like in the works.”

“This is something we talked about a bit internally. We kind of give summoner icons for everything atm, so we wanted to branch out here. That’s not to say it’s totally off the table, but isn’t something we’ve prioritized up to this point.

We have some pretty cool ideas as far as rewards in the works that I can’t share yet, but as a whole we want to offer cooler types of content and the rewards in champion mastery are some of the steps we’re making towards that.”

With Bard’s imminent release in patch 5.5, Meddler popped into a boards thread to answer the question – “where are the levers of balance on Bard”:

“Good question. Lever identification’s a big part of the balancing/game health assessment process for a new champion. In Bard’s case one of the key reasons he’s got a passive with so many different effects is that it gives us a lot of control over his tuning by game time, which is particularly useful given the lack of damage otherwise on his kit.

Giant list of the main balancing levers we see for Bard below. This is just from memory, so there are almost certainly a few important ones I’m missing however. Which particular levers it’s appropriate to use will depend heavily on what sort of problems Bard has, whether that’s excessive strength at certain points in the game, lack of counterplay, lack of sufficient reward for skilled play, inability to roam sufficiently or whatever.

Plus base stats of course. Most of the above can also be tuned by spell rank too, depending on when in the game problems arise.

There are also some minor levers as well that aren’t likely to be as relevant (W cast range, or E mana cost for example) but could be used if the appropriate issue crops up (e.g. if Bard has too little or too much early mobility E mana cost might be a useful tuning point, unlikely to be significant otherwise though).”

“Yeah, I figure we’ll be able to get him into a good spot balance wise if needed. I’m really happy with his current state based off our internal testing, that involves a tiny number of players compared to once he goes live though of course, so it’s possible what we’re seeing won’t be representative. He’s also a bit harder to assess as a support that (hopefully) will roam more than average – trickier to gauge how much power that will offer versus more standard play, given the lack of strong comparison points.

In terms of levers the ult’s the only one that might be a little bit light on them simply given the amount of potential power there. Delay, range, duration and AOE size are all pretty versatile tuning options though, so current assessment is we should still be fine there. Very interested to see how that skill especially gets used though.”