All Star Event Day 3: China takes down Korea and advances to the finals

Yesterday, once again, China has defeated Korea in an international competition. The Chinese squad dominated the best of three series and came out on top of the Korean team.

Earlier in this year, we saw China performing fairly better than the Korean teams, they’ve won matches on the Asian Rift Rivals. The Chinese teams were also the biggest threat to the Korean teams at worlds. This was the chance for the Korean squad to get the revenge, but unfortunately, they just couldn’t find themselves.

On the other hand, though, the Chinese team seemed really well prepared, with good strategies and communication they made it to the finals.

We’ve prepared an analysis of the matches for you, so read on! 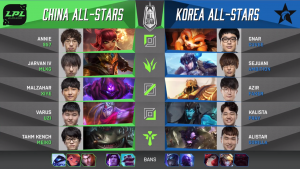 The Chinese Team broke the meta with 957 pulling out his well known (in solo queue) Annie Top Lane on a matchup versus Gnar. No one expected that 957’s crazy idea would turn out into a win for China, they were constantly picking the Korean squad out of position with champions like Malzahar, Varus, and Tahm Kench.

Although the Chinese Team collectively played very well,  we could notice that the Korean folks just couldn’t find themselves on this match, in comparison, they had a much better composition for team fights, but they constantly failed on setting and removing vision on their own part of the map, which obviously contributed for the Chinese to snowball quite hard.

It might have been that the miscommunication on the Korean side caused them to lose the game, and in fact, their composition required a lot of communication to work as expected, whereas on the Chinese side we had a much more simple idea of a comp to execute, and they did it with mastery. 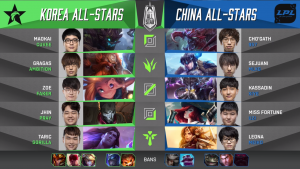 This match was a complete rollercoaster, the big mistake from China here was to leave Zoe open, as a result, Korea gave it to Faker without thinking twice and as far as we can tell, the Zoe was definitely the biggest question mark for this match.

Even with Zoe on Faker’s hands, the game was not easy for the Koreans, the Chinese were completely dominating the early game with a lot of proactivity around the map, MLXG’s Sejuani was hands down being the MVP up until the point where everything started falling apart.  On a dive in Bot Lane where Korea was able to respond pretty quickly and Faker with his precise Zoe was able to dismantle the Chinese aggression.

From the Mid Game on, the Korean side dominated the game, not even a sneaky baron from the Chinese side was able to stop Faker’s Zoe. They ended up taking the three inhibitors and both nexus turrets, but they just couldn’t close out the game, and at some point in the game, China has begun to come back and win the fights.

Well, they did win the last Team Fight, but the Korean WINIONS guaranteed the win for the Korean side tying up the series. 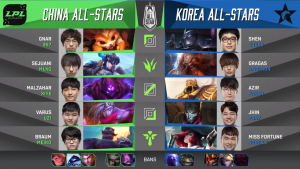 China was clearly overperforming since the beginning of the series, now they made sure to not leave Zoe open and yet again they made a crowd-control focused composition.

With Zoe out of the way, things got easy to the Chinese side, MLXG was yet another time being very proactive on the map while Ambition seemed kind of lost on the map. The Chinese squad was able to snowball in the early game and then they just played around objectives.

The Koreans tried, but the miscommunication among them seemed so much. Not even a baron steal from Gorilla made the game close, the Koreans failed so hard and as a result, they fell upon the giant Chinese.

Bjergsen and Uzi win their One vs One matches and get to face each other on the Finals!

Bjergsen and Uzi win their One vs One matches and get to face each other on the Finals!