Last up we have Riot ForScience with a big batch of concept art from the Summoner’s Rift update:

Summoner’s Rift has come a long way since League’s launch in 2009, but our latest update to ol’ trusty was the biggest change in the map’s history. While all updates go through iterations and testing, Summoner’s Rift required a huge team of artists to concept and sketch out art for months before we started working in 3D. To celebrate the end of SR’s beta run, we’re releasing a few of the concept art pieces the environment team created, complete with notes and insights from the artists themselves. 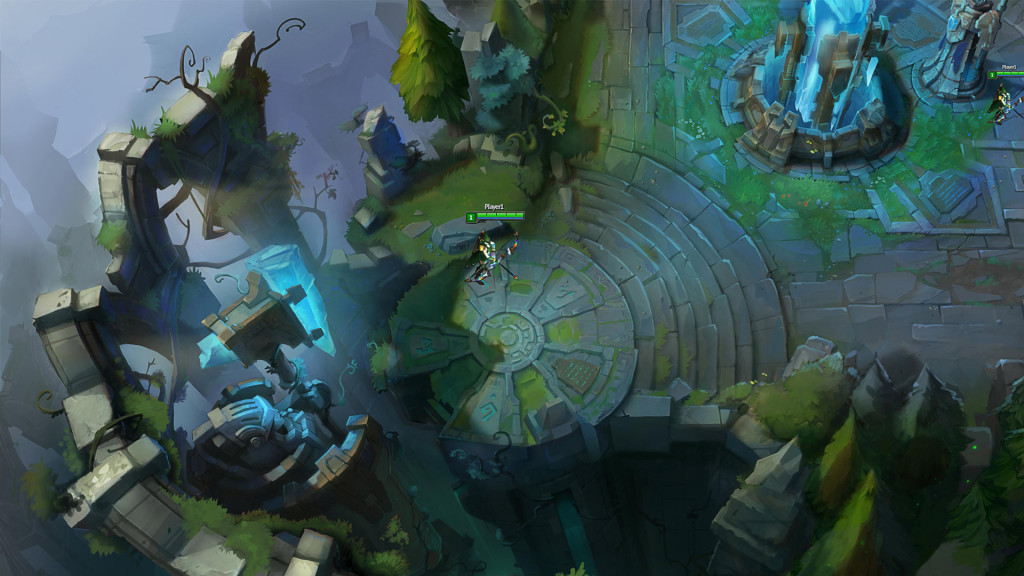 Here’s a super late painting we created to hone in on the spawn area’s lighting. The beta launch of Summoner’s Rift actually had zero lighting, but we slowly added elements in as we updated the map.

We painted this up to study how we could show terrain transitioning from areas near Baron to places way away from him. 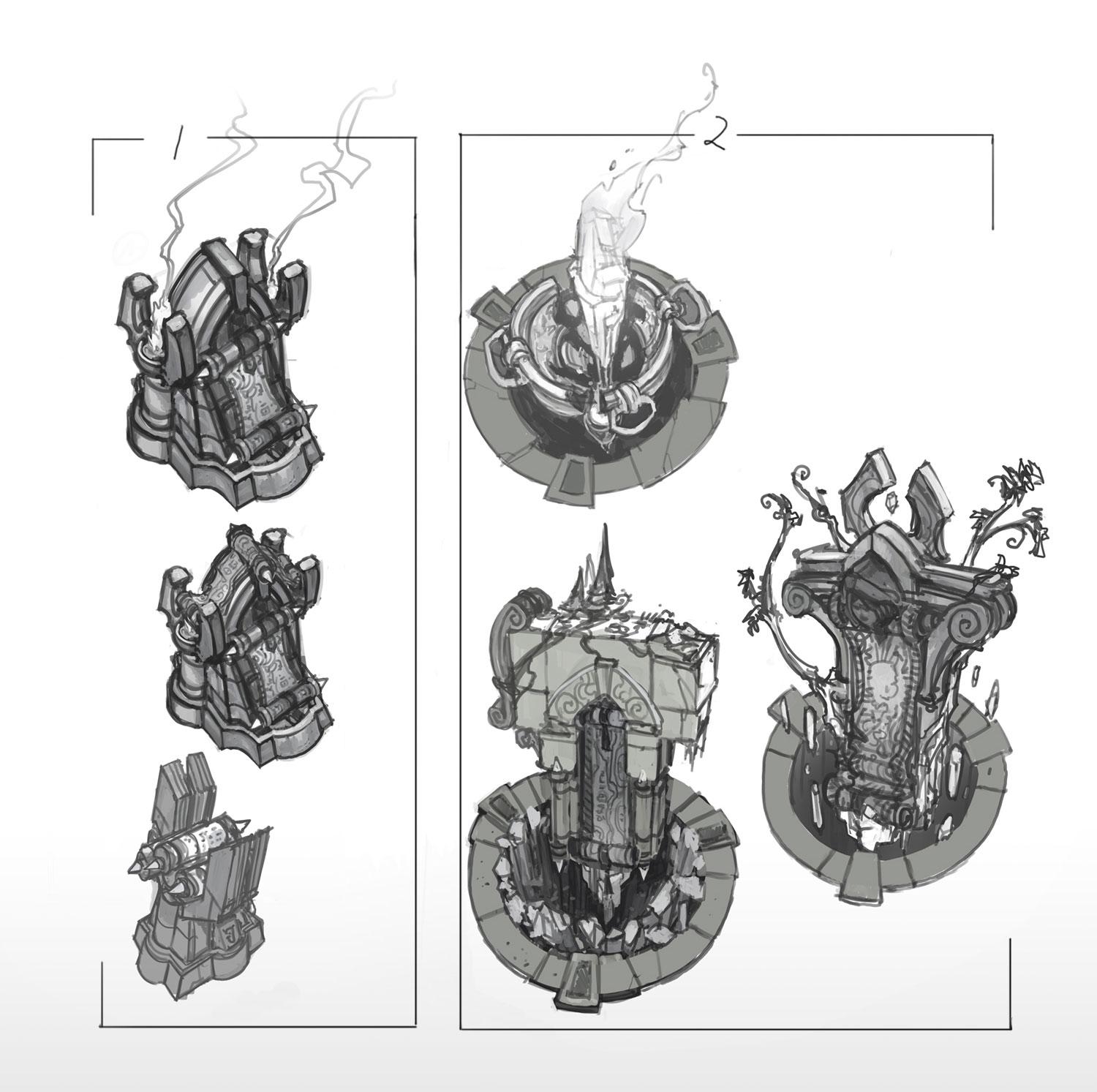 These are some concepts that we sketched out for an asset to replace the small cluster of trees in the original SR bases. We wanted to replace that blocker (the term we use for something you can’t move through) with something a little more visually interesting and architectural.

Remember the old wraiths? We sketched out a TON of ideas for things that could replace them. After trying a few of these guys out, we started leaning towards some bird-like creatures that eventually evolved into the raptors you see in the rift today. (1. Vulture Monkeys, 2. Dire Porci Rat, 3. Shroom Thugs, 4. Crystaling, 5. Mudworm, 6. Mandrake gone bad, 7. Stummpils, 8. Plant Chomper, 9. Scorpo FIles, 10. Flame Pixie, 11. Not Warrior, 12. Globs) 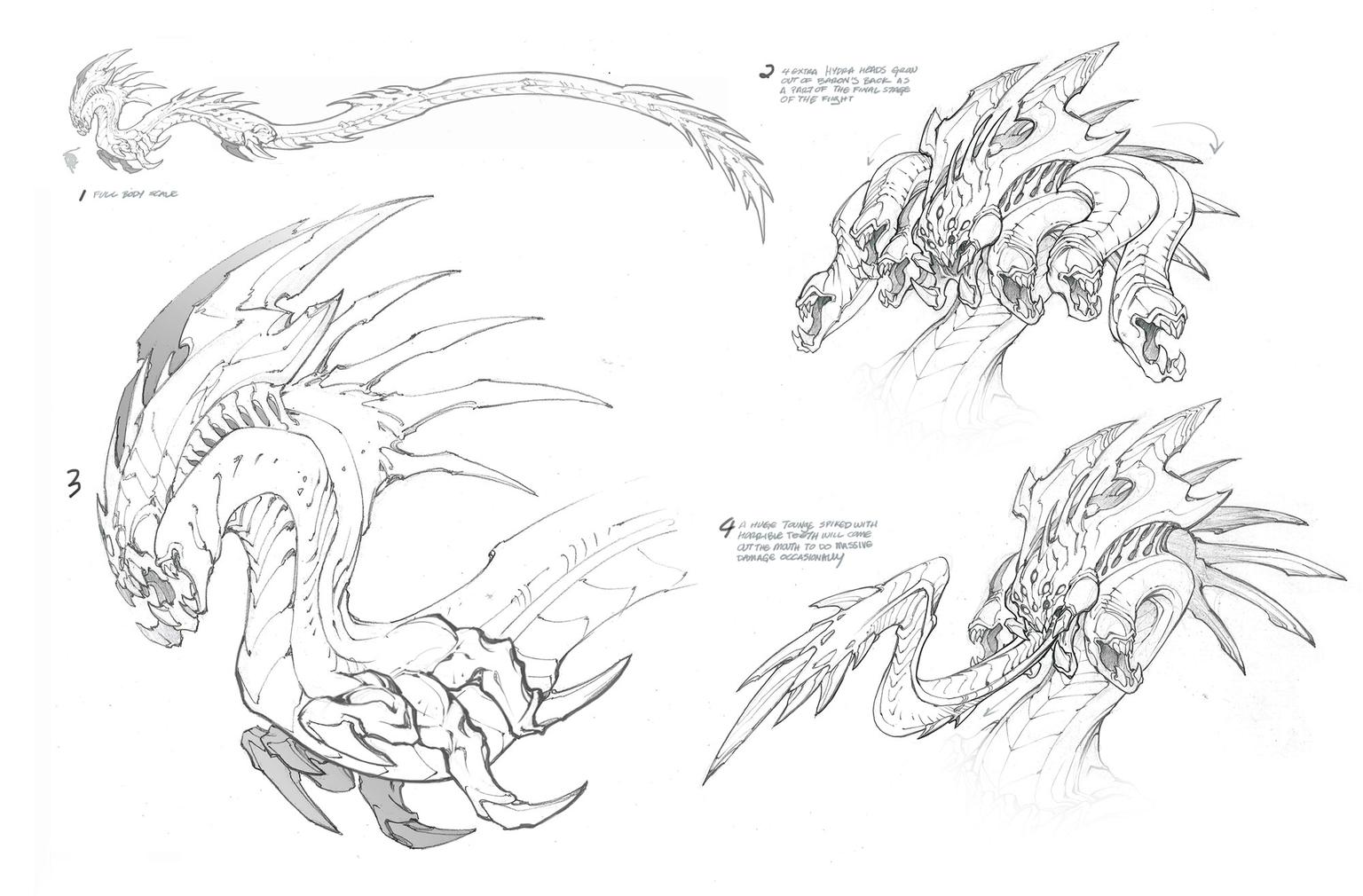 Old baron was… well… a bit of a sock puppet. After trying a few ideas out, we ended up using the model that would later be in A Twist of Fate. But we still iterated, making tweaks to his head area, and giving him a huge body that we could really show off in his spawn animation. 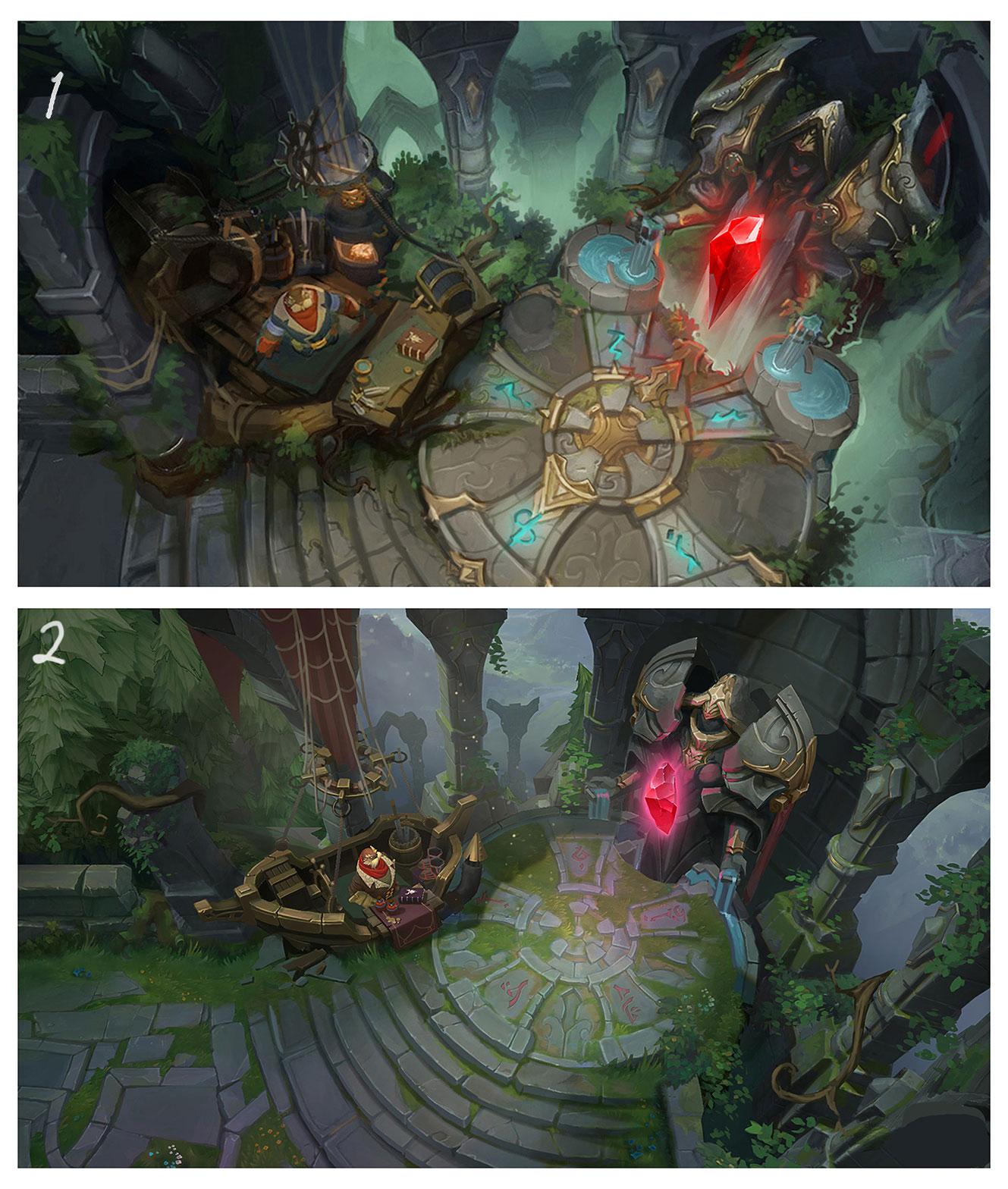 These are a couple of early studies looking at the composition of the north spawning platform and shop. The first is earlier, and from it we refined shape language, values, how busy the area would be, and overall composition. 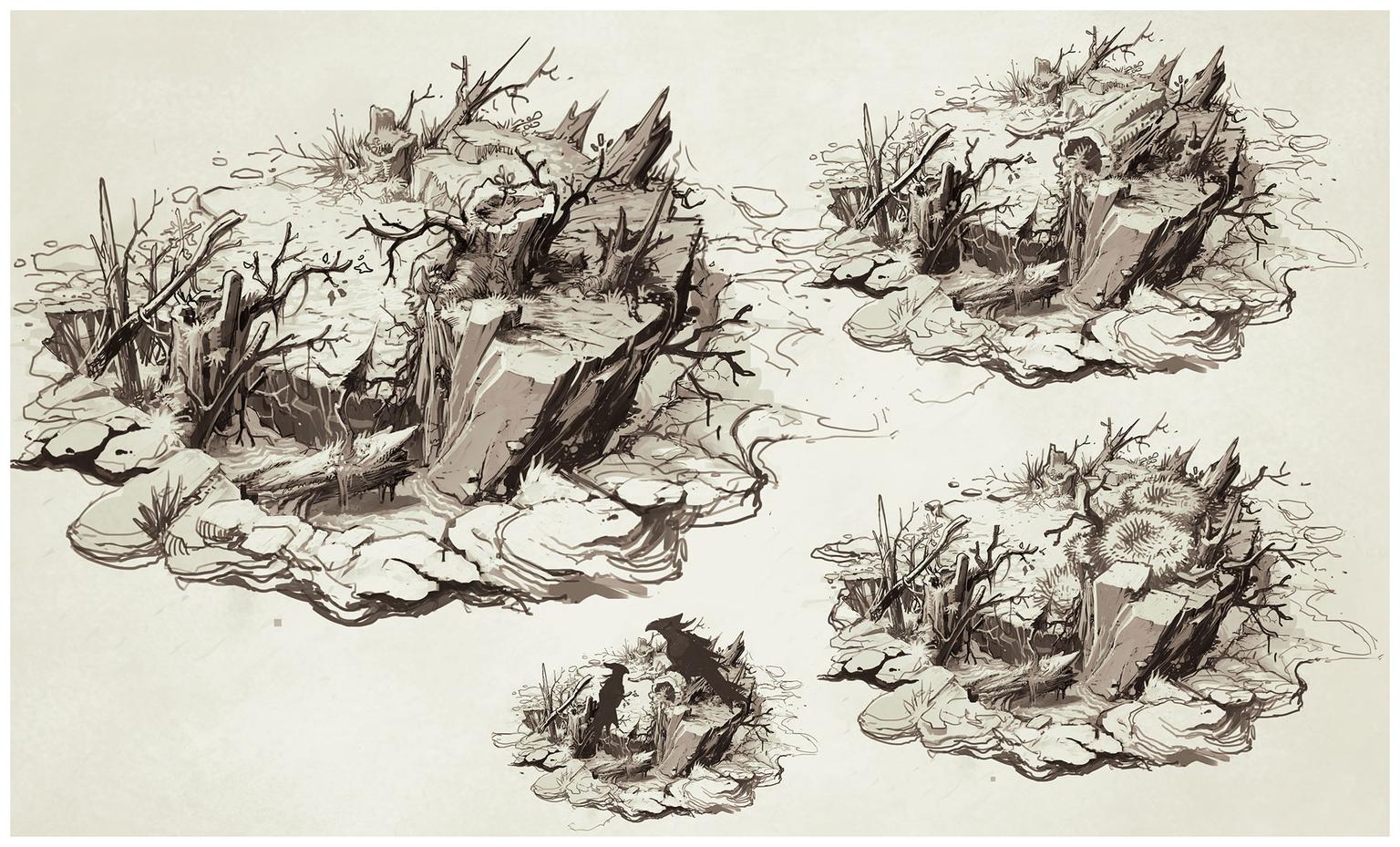 These are super early sketches of the northern area, which we wanted to feel more destroyed than the rest of the map to emphasize Baron’s catastrophic impact. These drawings pushed really far in that direction. 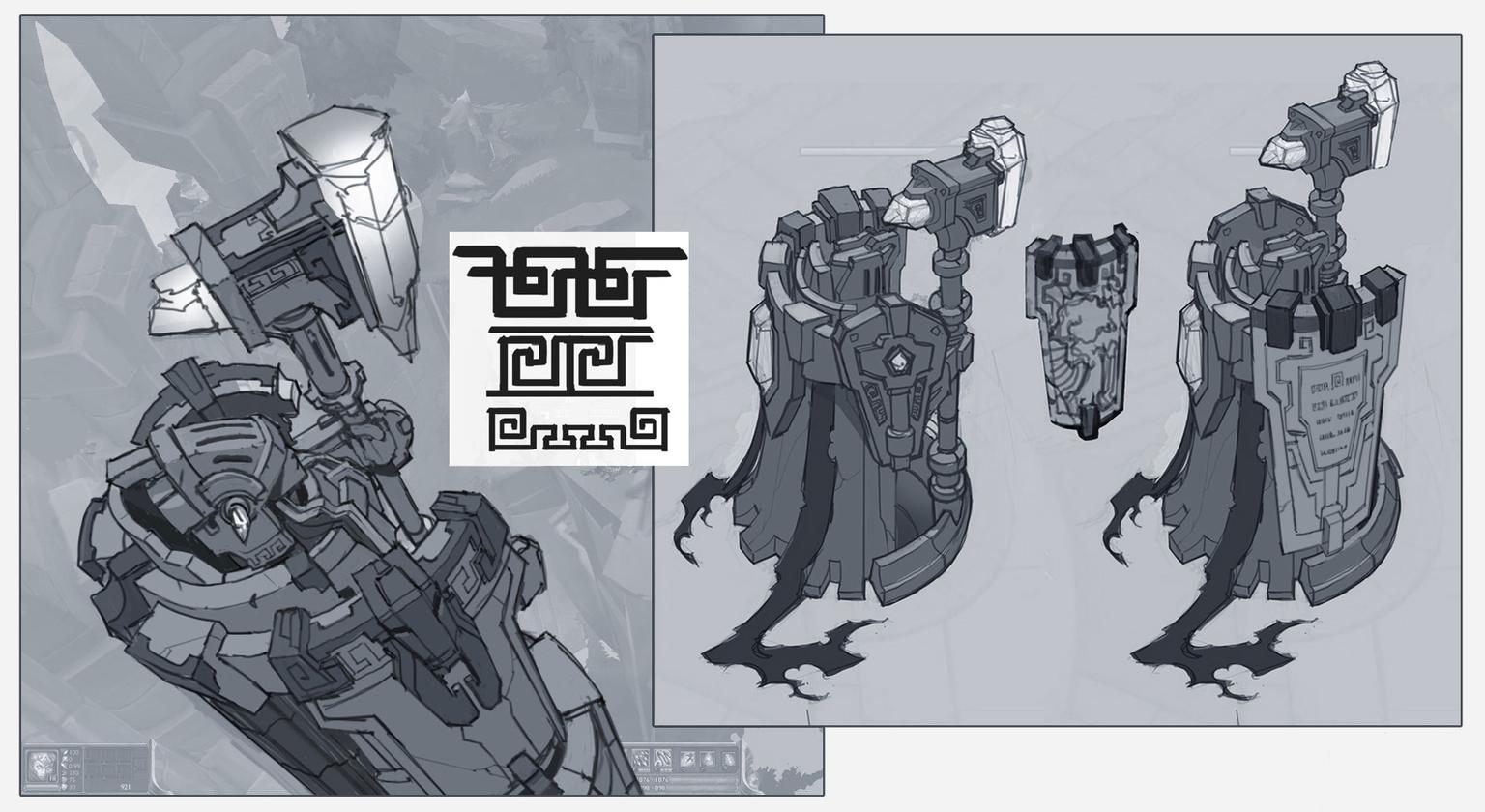 We used a sharp shape motif for the Paladin (or south side of the map) that would stand in contrast to the Mages (North side). The Paladin elements in the map are strong squared shapes and motifs that stand out from the sharp, aggressive, and dynamic shapes used by the north side.

These are some explorations looking at how the rift would infuse one of the more natural creatures on this mountain. 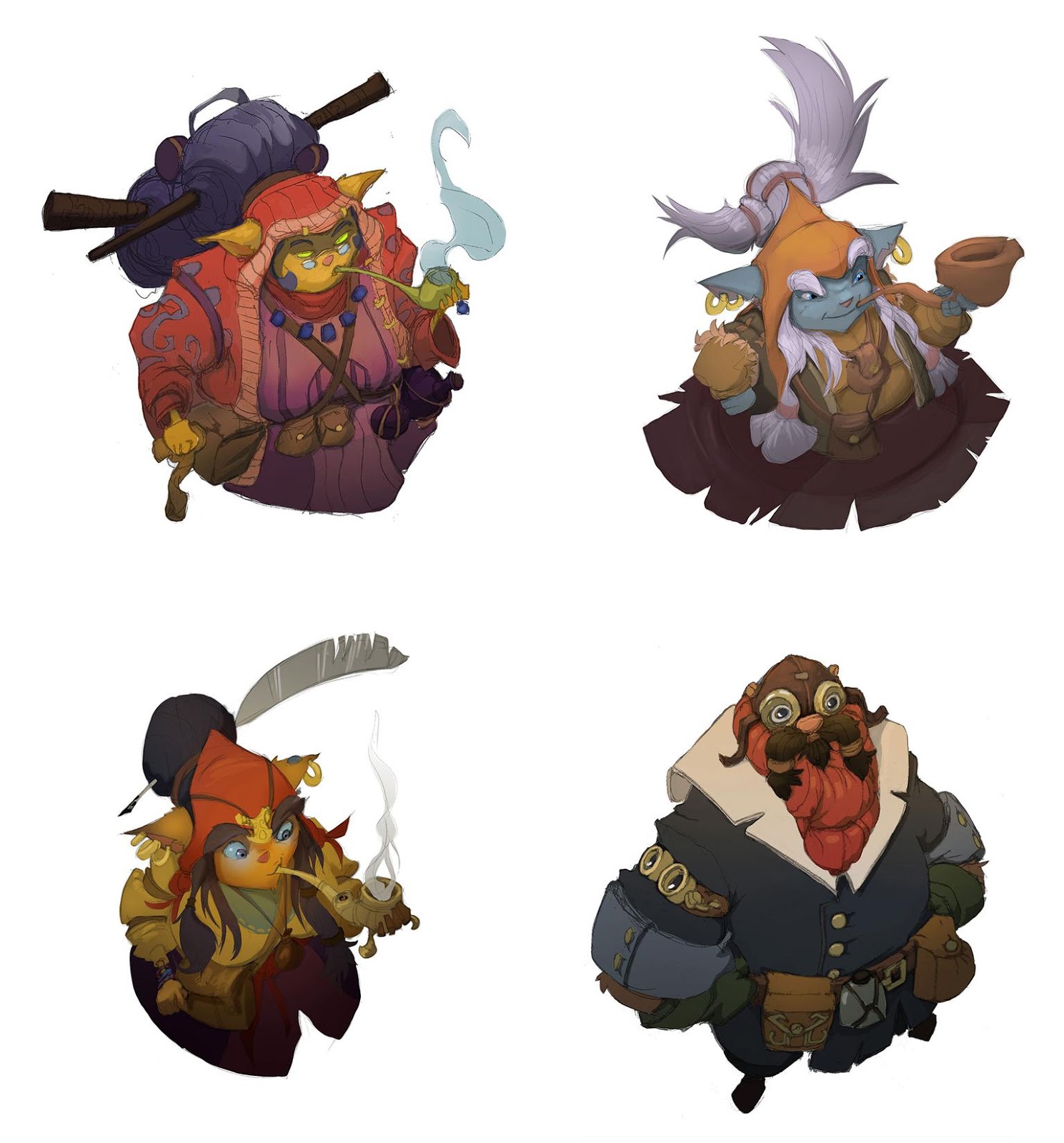 Back on Howling abyss we designed one of the shopkeepers to have this massive pack-yak. We really loved the idea but we could not get him to work within the constraints of the Freljord. He eventually became a she, and fit perfectly into SR. We always knew that we wanted some type of shipwrecked balloon-riding yordle for the north shopkeeper. 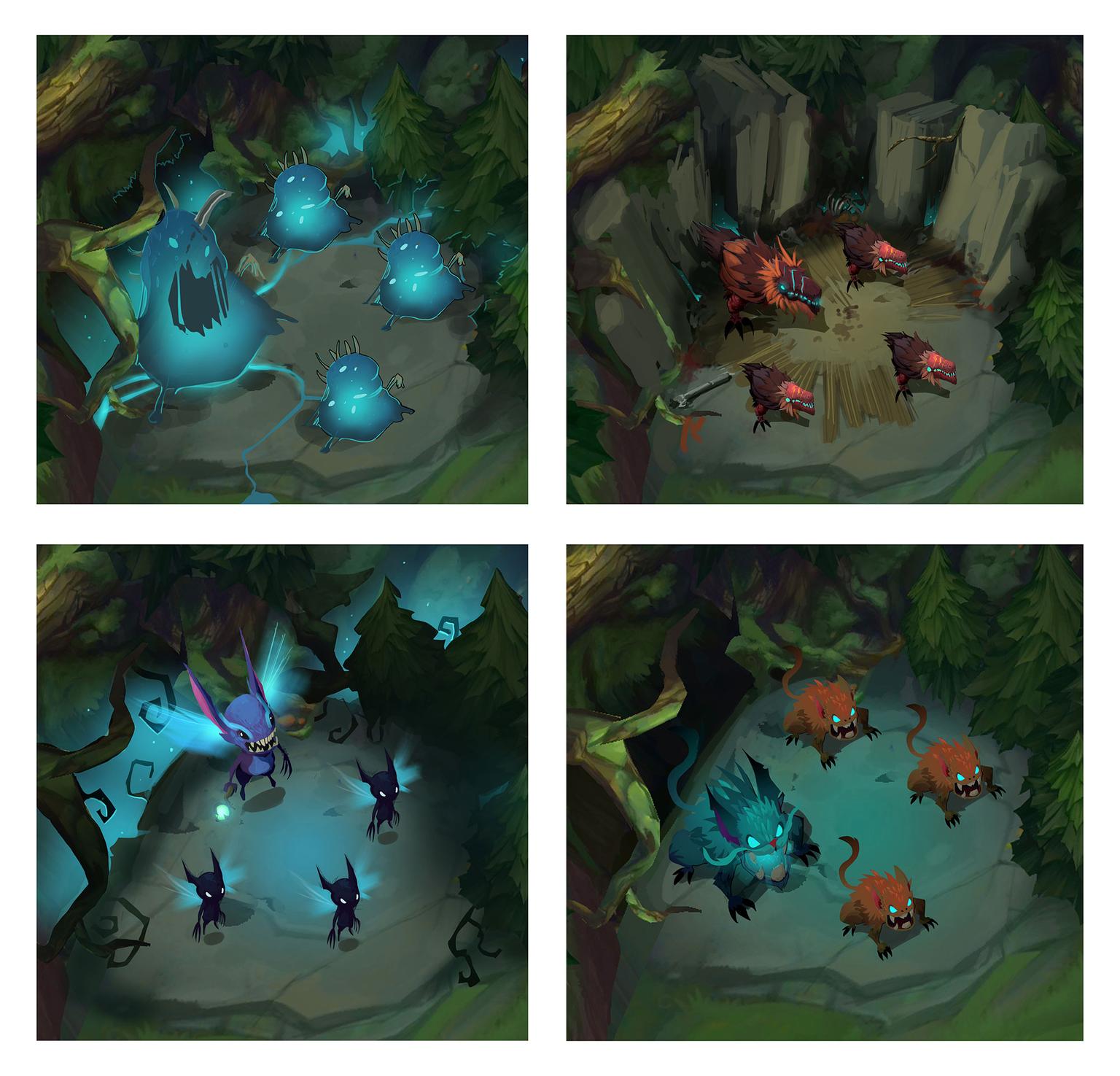 We knew really early on that wraiths didn’t feel indigenous to the rift, but it took a really long time to find a critter that would fill his shoes. 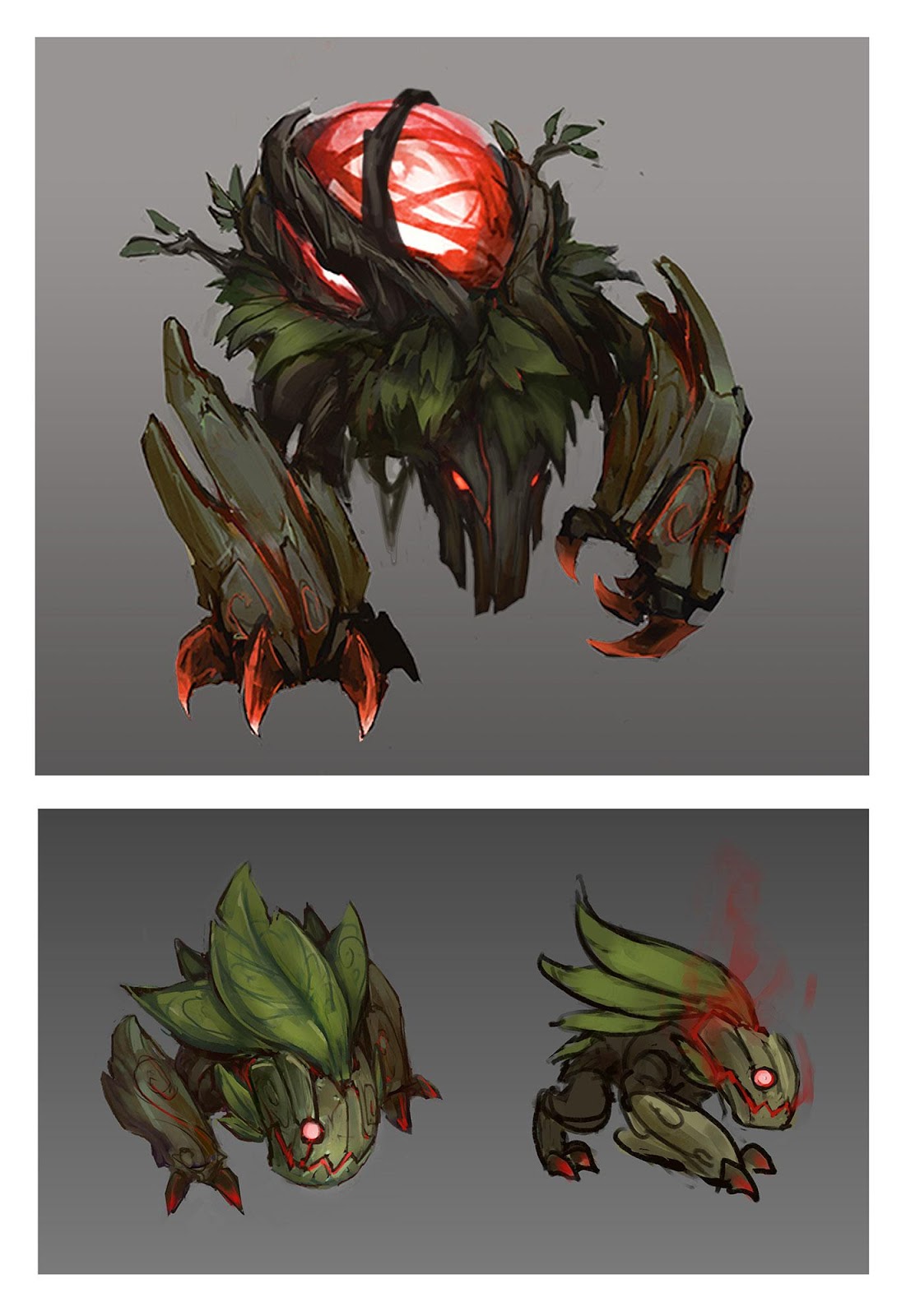 The team really resonated with the idea that the magic of the rift physically forming into its guardians, and the Brambleback in particular to reflect the raw aggression that you feel when you pick up the red buff. 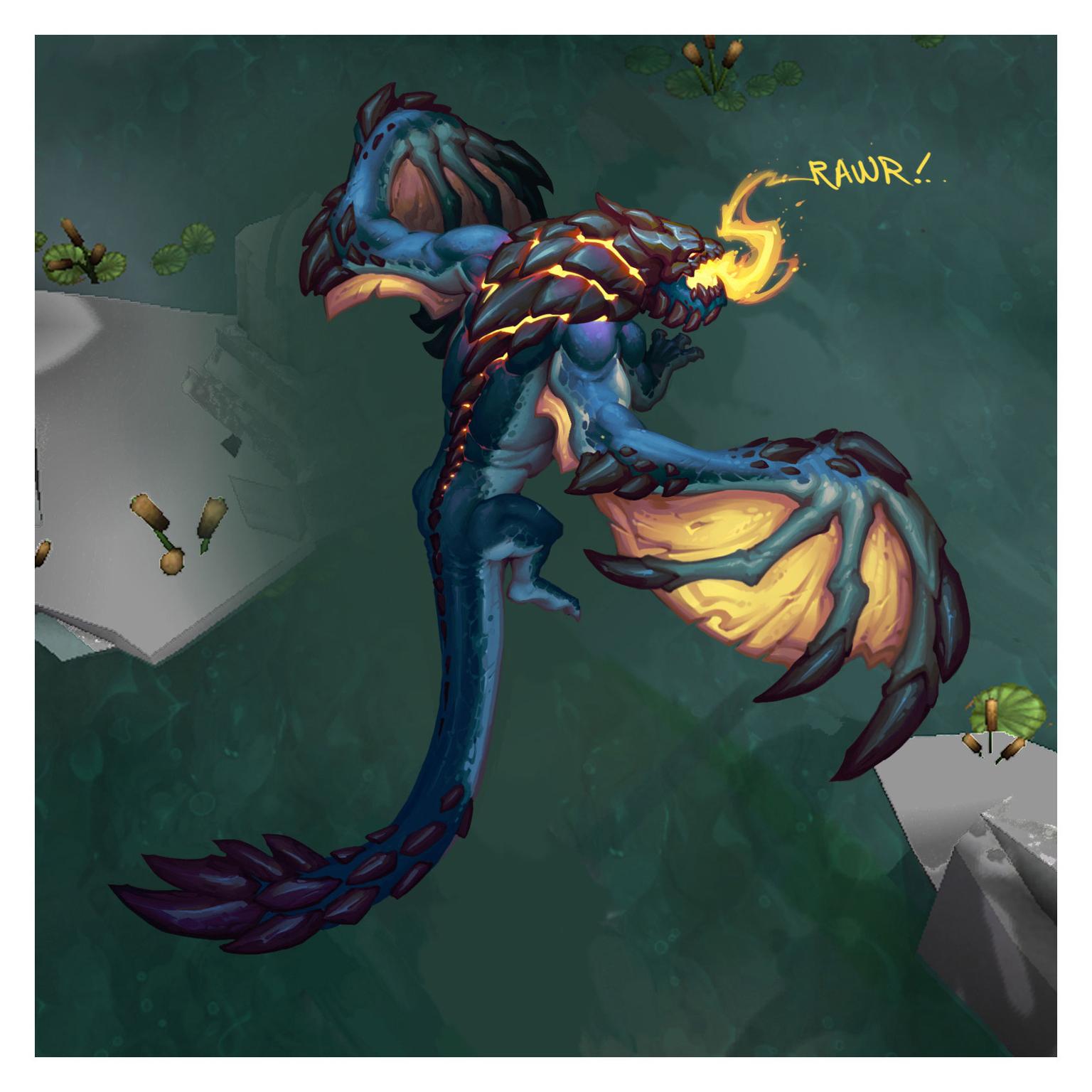 There was a lot of focus on how we wanted a unique dragon from other IPs and fantasy games. We tried a grounded dragon, but ended up with a thick, heavily armored guy, so carried on until we gravitated around this study, which put us on the path to finding the unique League take of a dragon. 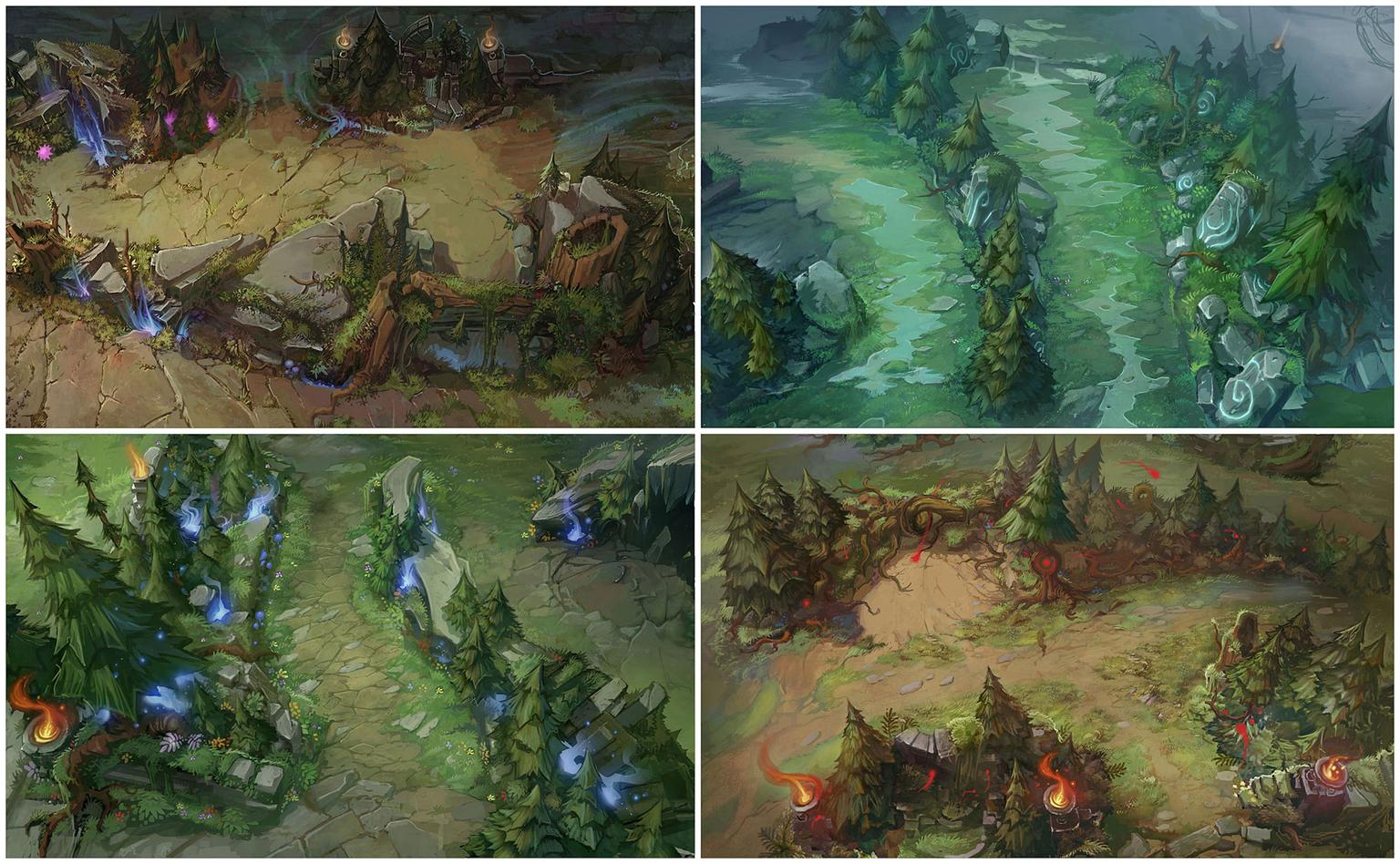 We spoke about quadrants during the map update’s beta stint, but here’s a really clear representation of what we wanted to pull off. It’s a really early painting, but even still you can see the redwoods in the north, the cairn-stones in the east, and the overgrowth and vines in the south. We ended up going with a different direction in the west jungle, but its color palate and tone is still pretty similar. 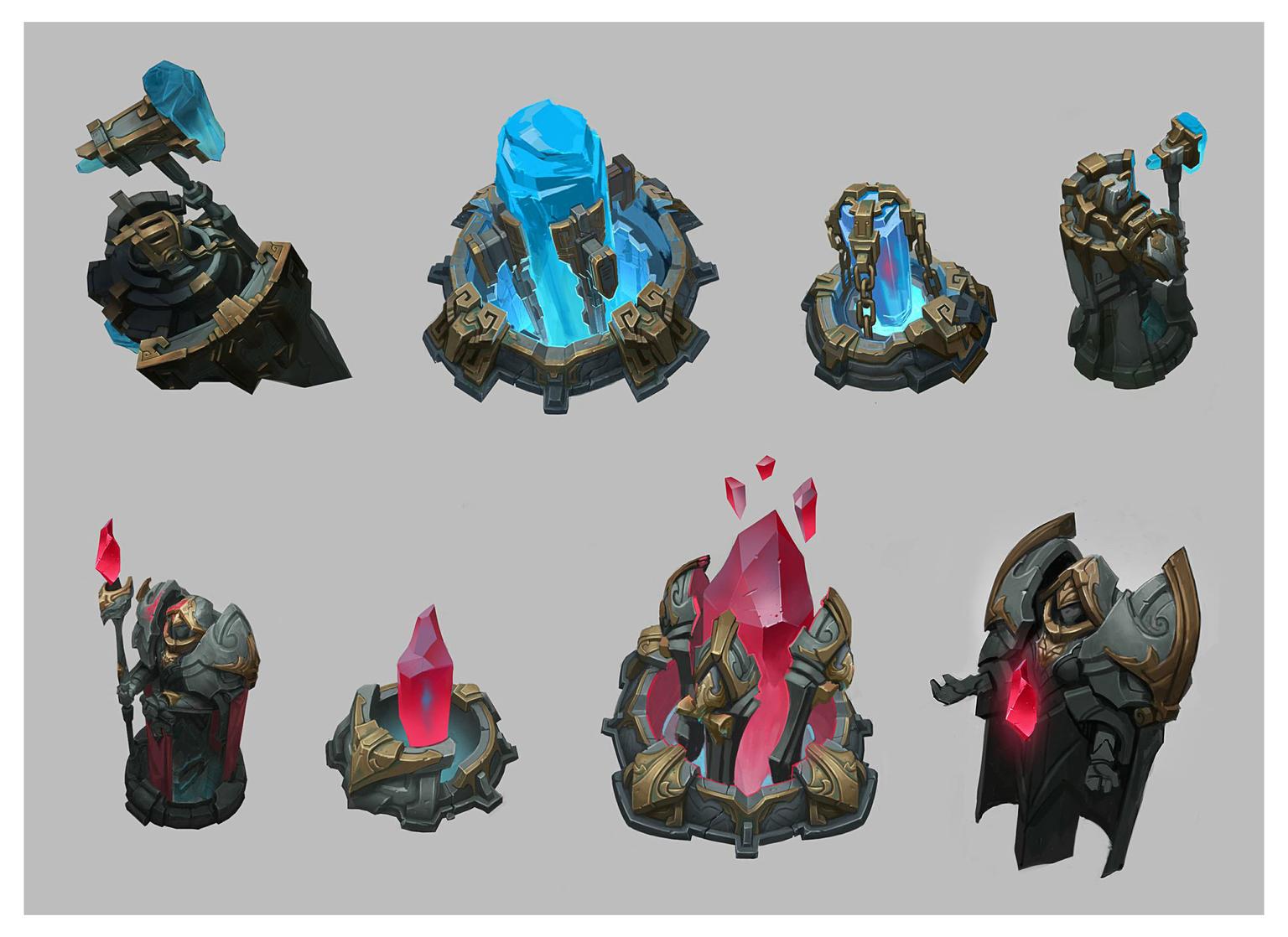 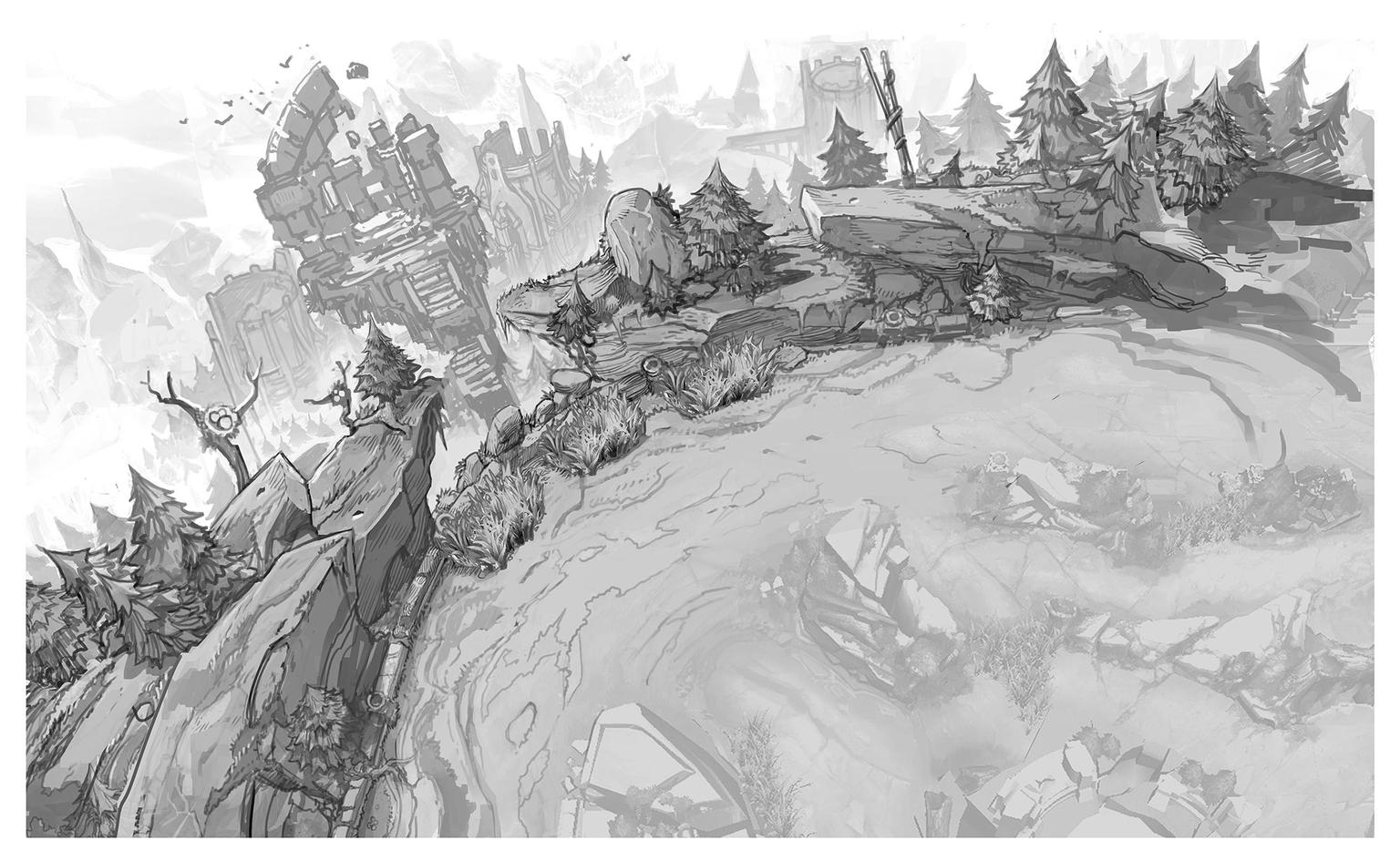 In this top lane vista sketch, we wanted to explore rock shapes and study the integration of the background elements. This is a more wild version of the area that you see in SR now… and has a lot of eggs. 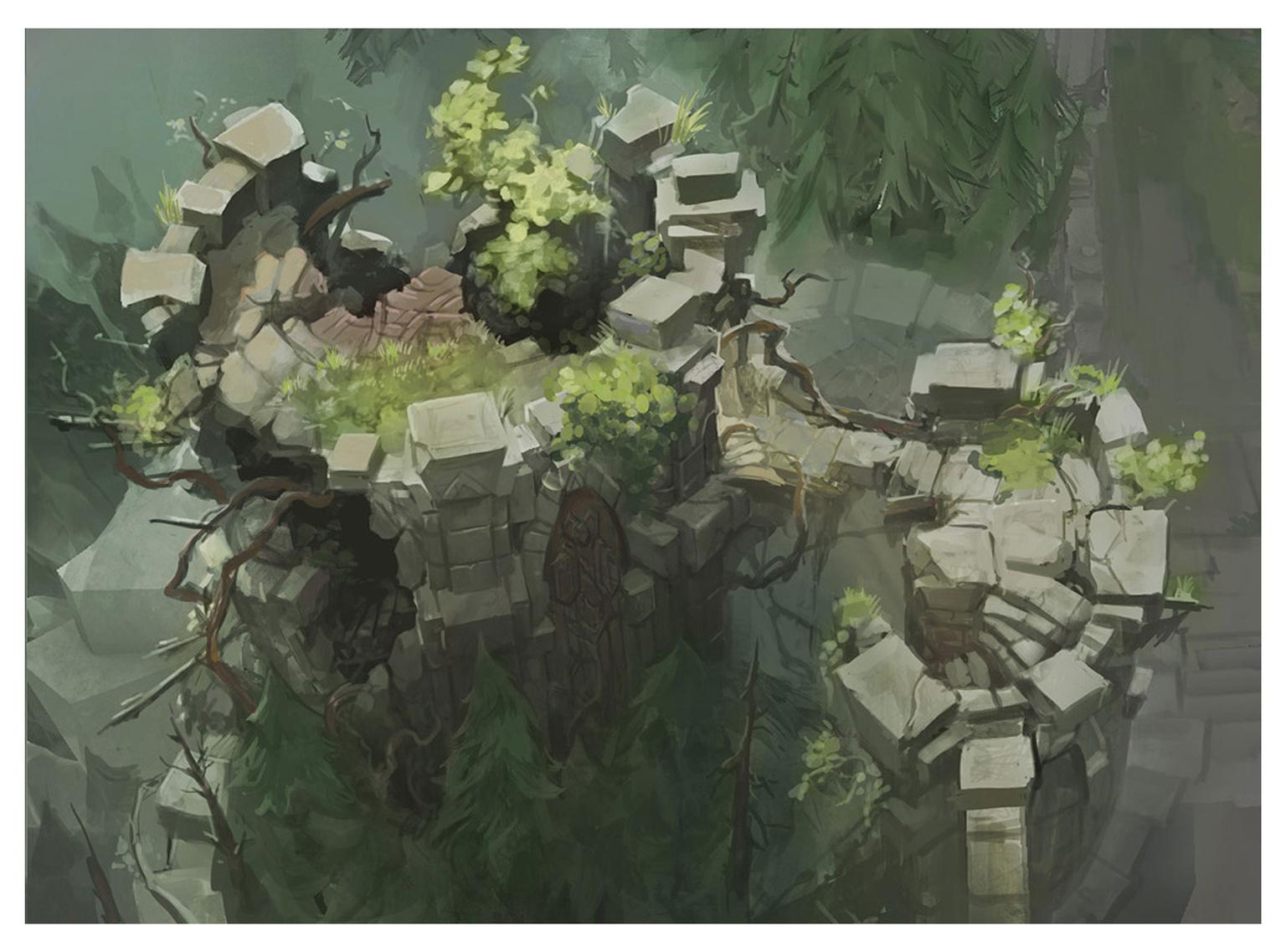 Here’s an exploration of the architecture we had out in the periphery of Summoner’s Rift. We really wanted to use this blocked off space to show structures that the native cultures built, hopefully giving you guys a sense of a consistent and cohesive world.

Our early minion concepts explored ideas like minions made out of animated magic scrolls, bolts of cloth animated by magic, and even just sound. 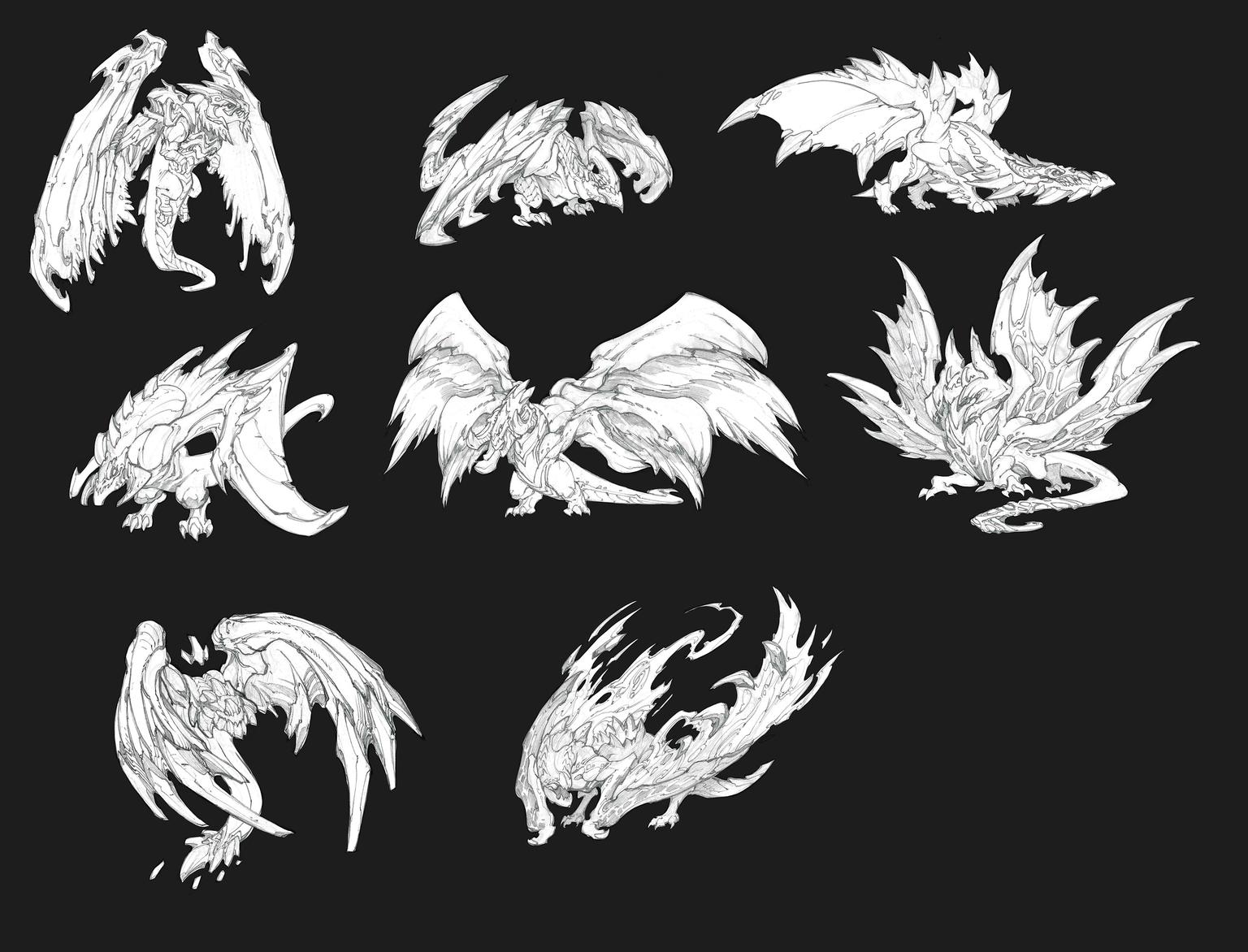 This was actually a very late exploration of Dragon. Many of our earliest ideas for Dragon were not even dragons at all, but ran the creature gamut of what could fill that role on the map before we decided to go back to a more traditional scales and wings creature. The dragon we have in-game is a combination of the proportions of the first dragon, the head and wings of the third dragon, and the tail of the seventh guy! 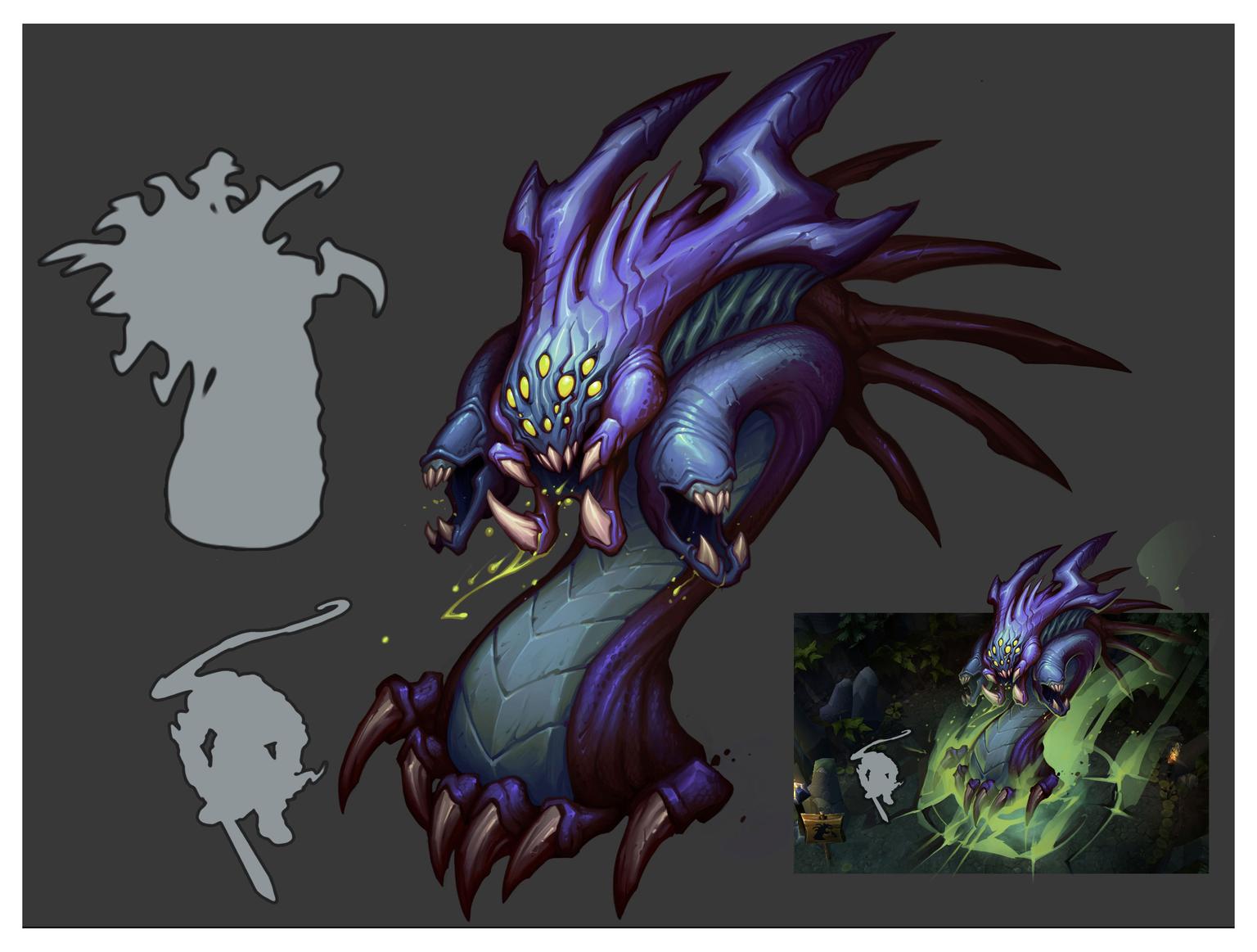 This Baron illustration was one of the first images that was created for SR. We heavily referenced him for all of production. The way he is constructed (using stylized but very aggressive shapes) guided how we created everything from creatures to rocks to trees from that point on.

This concept was an attempt to apply a very heavy and distinct theme on a specific quadrant of the map. The cracks show that you’re near Baron, and we created giant trees that were ripped down when Baron spawned, with tons of new life grown back since. 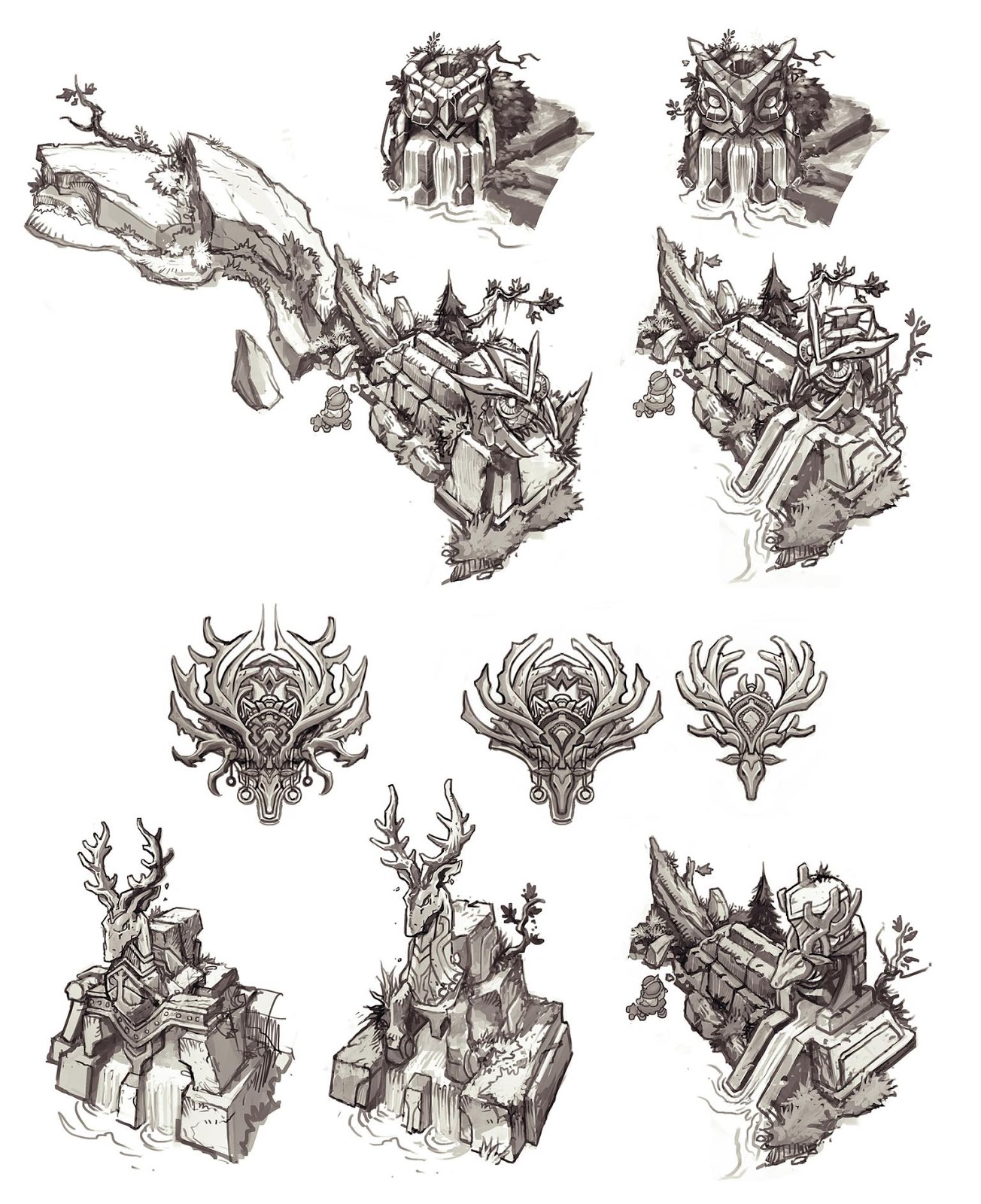 We explored two opposing animal types as the potential themes for the different sides of the map. Here are some early sketches!”
For more answers, you can check THIS post where Alex Gonzales answers question asked about the arts never showed up on the Rift.
Previous Post