And why stop with reading patch 12.13? Make sure to check in on the sizeable changes that we shipped during our mid-week update, they truly were impactful! As for these notes, we’re reducing game time slightly, improving the Carousel experience in Double Up, reworking Aurelion Sol, and shipping a whole lot of balance changes! Let’s get into it! 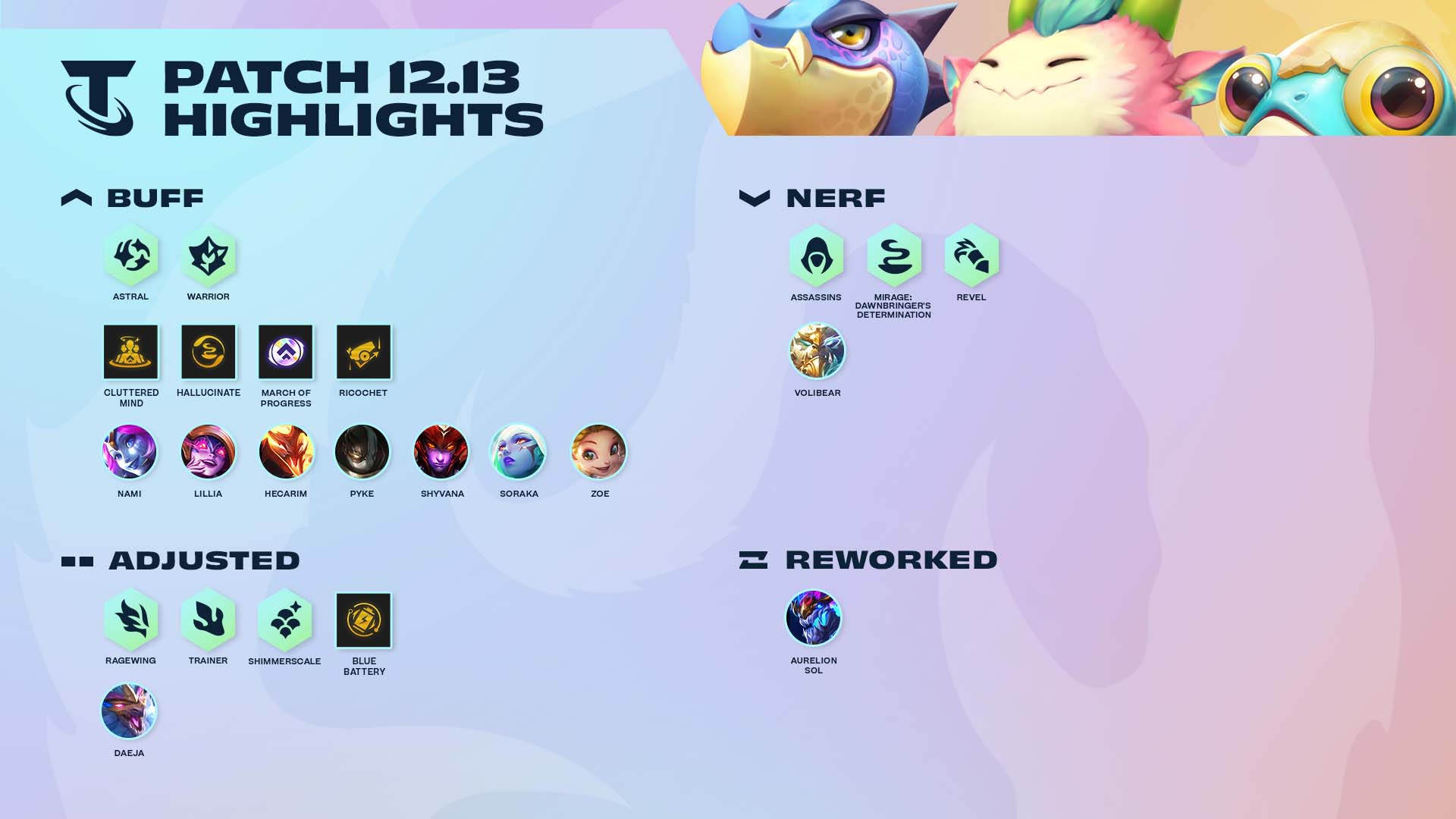 In order to reduce the total game time slightly, the following changes have been made:

99.99 percent of games end before Stage 8 though—this change is for that .01 percent that just need to move on.

Large, like the time saved climbing to Challenger with our game time cuts.

Despite several nerfs in our 12.12 mid-week update, Assassin is still performing a cut and jump above the rest.

Astral’s getting a shiny new Refresh button that indicates the quality of orbs, but I’m just worried that this is going to make me roll away my economy like Poggles did IRL.

Astral Emblem has proven to be too game warping in both Double Up and casual play, where players are less punished for greedily leveling and able to hit tier 5 units early, allowing for powerful starred up Legendary units to take over the game. With Astral Emblem gone, is there hope for the tft reddit mods?

Ragewing 3 is often used to give the selected carry (Swain or Xayah) survivability through Omnivamp as well as bonus Attack Speed. This use case is slightly too effective, while Ragewing 6 and 9 suffer. As our exciting fiery trait, we want Ragewing to be viable as a vertical, so we’re buffing it here and also giving the trait’s Dragon (later section) substantial buffs.

We’re using this patch to bring the weakest and strongest items offered through Shimmerscale closer in power. Regardless of what the Shimmerscale items are, they should feel good to get rather than making you wish they were Draven’s Axe, an item that is particularly strong on units like Xayah and Corki.

The difference in power between Trainer 2 and 3 is negligible, and that just can’t stand for the Nomsy enthusiasts amongst us. The devs at the top finally got the message, “the draconic frog is iconic pog,” and they’re giving Nomsy the power she deserves. Remember, the newly buffed Nomsy Fireball damage is doubled at Trainer 3!

We’re happy to see Cavalier carry builds pop up (and off) and are giving a 1 and 2 star buff to a unit we think most fawndly of.

While Tristana’s performance is just above average, we’re nerfing her alongside her other overperforming Cannonneer pals to place more of their power into the their trait (buffed above).

Dragonmancer Swain relies on ramping damage and omnivamp to take fights into overtime where he truly ascends into his demonic dragon form. By slowing his base attack speed we slow his ramp time and by lowering his base Health we make it easier to burst him through his sustain.

Dragonmancer Volibear continues to be too strong in the midgame, with the ability to both deal and take far too much damage. By removing some base damage here, his DPS and survivability with the popular Bloodthirster build should recede. These changes also further the power jump between Volibear’s two and three star power levels, which were bearly noticeable prior.

Daeja is an Ability Power Carry with the passive ability to shred Magic Resist. With this adjustment, her role here is even more refined.

As for the other changes on this list, I’m willing to bet the League of Legends patch writer’s paycheck you expected them.

Aurelion Sol’s power ceiling was through the roof (and into the stars) with Mage Emblem and perfect items, resulting in him needing to be balanced around this optimization. That created an unfun situation for Astral vertical players that just couldn’t hit those items, but still wanted to create supermassive black holes.

Shyvana is strong when properly itemized as a carry but she can take too long to get her 2nd cast off. Reducing her Mana helps her more reliably burn the backline a second time, but it will come at the cost of some of her tankiness.

As with Shyvana our other tier 5 buffs are intended to keep these units feeling legendary and worth pursuing with fast level 8/9 strategies.

With much of Jeweled Gauntlet’s power locked in Critical Strike Damage, the item has become too dependent on units needing high Critical Strike Chance to be worth it. By placing more of its power in flat Ability Power, we make it a more consistent standalone item for Ability Power carries that don’t hit the Infinity Edge combo.

Similar to what we did with Shimmerscale items (bringing the weakest and strongest items closer together), we’re also doing with Ornn items (obtained through Forge Augments).

The power of our friendship is too strong, and so is the Best Friends Augment.

Blue Battery will no longer stack with Blue Buff. Don’t use them together.

With this Ricochet change you’re more likely to hit backline carries with the bounced shots as opposed to just hitting more tanks.

Some math for the new Guild 7 chase trait. At Guild 7, your Guild units will receive 500 bonus Health from Sejuani, 50% bonus Attack Speed from Twitch, 50 bonus Ability Power from Ryze, 50 bonus Attack Damage from Talon, 10 bonus Mana per basic attack from Bard, 15% bonus Omnivamp from the Guild Emblem bearer, and a partridge in a pear tree.

Bard at 1 star already provides so much value through teamwide bonus mana on attack and doot collection to the point where his spell’s value just leaves your opponents with a bard time.

Getting repeat Ornn items from Living Forge isn’t just less exciting, it’s also harder to play around because the chances are, you aren’t running multiple units that can make good use of the more specific carry items. I will say that multiple Rocket Propelled Fists will be missed.

We’re shipping a number of quality of life updates for Double Up that primarily revolve around Shared Draft (Carousel) release and clarity.