Bard, the Wandering Caretaker is here to enlarge your list of supporting champions. In this League of Legends game he will be known for his high mobile abilities that are giving him the opportunity to move fast around the Summoner Rift. By collecting the new add chimes he is able to cover a lot of ground while supporting his team with great health packs. Bard is also great for increasing his overall team mobility because of his long range portals and his other abilities. 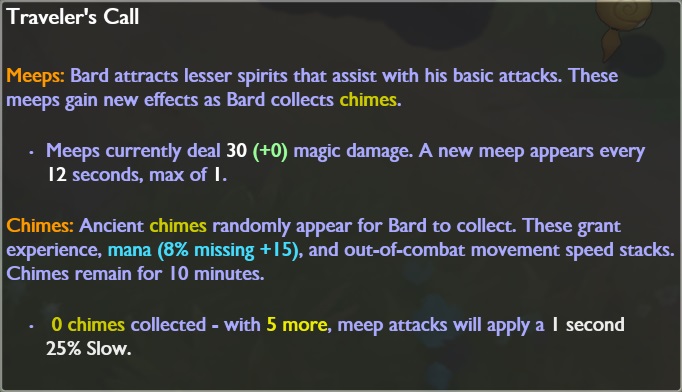 Bard’s presence causes sacred chimes to appear in the Fields of Justice. Plucking up a chime grants Bard a brief burst of movement speed, experience, and manna. Bard also attracts small spirits also known as meeps. When Brad attacks the enemy champion every spirit deals additional damage and then disappears in the spirit world. As Bard collects the chimes these meeps grow in number and power, so the more meeps Bard has, the more additional damage he will deal.

He fires a burst of spiritual energy which is damaging and slowing the first enemies that it struck. The Cosmic Binding can burst through enemies, so after the first enemy stricken, it can strike another one. If it strucks both enemies it stuns them, also if the cosmic hits the wall stuns the initial target.

Bard puts a health pack on the ground and each ally champion that walks over it gains health and movement speed. This health pack can be destroyed if the enemy stands on it for a second

For me this is one of the best abilities that one support can have. It reveals a portal on a target wall through which each champion no matter if its Brad’s ally or enemy can pass once they enter it.

And last Brad’s R the Ultimate is called Tempered Fate.

This ability gives Brad the opportunity to freeze champions, towers, dragons in the area of his ultimate pack. Those frozen objects and champions are immune to damage until the effect of Tempered Fate disappear.

You can check all abilities in the video below.

With the fact that Bard is wandering spirit, with his abilities, he can roam around the rift with ease, while collecting his chimes and in the same time helping his teammates. With his first ability Cosmic Binding he can stun his enemies while leaving easy kills for his marksman. At the same time he Caretaker Shrine gives him the opportunity to place heal packs which will help his teammates to recover from battle or to get on time in the lane that the team is losing.

His third Ability or the Magical Journey covers long distances in specific locations which gives the opportunity to open a way for his fighters and assassin access to the enemy jungles. Bard can use this ability to coordinate allied champion movements, and by that I mean he can quickly move his damage dealing allies to a possible ganks or to an objective for example Baron, Dragon, Turret or Inhibitor.

His ultimate Tempered Fate gives him the opportunity to secure and protect objectives on the summoner rift. This ability, for example, can be used if the enemy team is diving his ally on their turret. Tempered Fate will freeze his ally for a few seconds and that will buy time so his other teammates come for help. Freezing ally turrets from taking damage, freezing baron and dragon are some of the things that Brad’s ultimate can do.

Bard goes well with Catlyn, Udyr and Amumu. He struggles against Leona, Draven and Rek’ Sai.

We’ve looked at the idea of roaming supports before. Alistar was one, for a while, before he roamed so well you guys transitioned him into a death-dealing jungler thanks to his nigh on unstoppable W+Q combo and extreme tower diving capabilities. So we made changes, nerfed his extra monster damage, and put him back in his traditional support pants. But we still liked the idea, and so started thinking of ways that we could bring a new champion into League that had all the hallmarks of a roaming utility support.

At the same time, one of the champion concept artists had drawn up a really compelling character. He was strange and otherworldly looking, so we started figuring out how we could join these two pieces – roaming support and this character – together. After trying out a few different mechanical hooks (he was, at one stage, a pretty bardy Bard, with a musical theme and an instrument that was more central to his abilities), we ended up with a cosmic character, a caretaker who existed to protect relics and places scattered around the world.

So how’s he different in game? Well, Bard’s roams to empower both himself and his allies. Each chime he collects soups up his Meeps passive, and as he travels, he’s incentivized to help out his other lanes and jungler with Caretaker’s Shrine. Crucially, they don’t require him to hang around, so Bard can pop into mid, drop off a shrine, then carry on towards top on the hunt for more chimes. Each chime gives him a short movement boost (so he can jet around at a decent pace), experience (so he doesn’t miss out on too much minion xp), and mana. All this means he’s rewarded for roaming, and can (hopefully) leave his marksman during laning without handing them a big fat death sentence.