Jinx is an AD carry who deals tons of damage. Her unique skillset makes it easy for her to burst down enemy champions, while her passive allows her to escape or reposition easily. If left alone, she can easily take down towers with her attack speed stacks.

Jinx’s first ability is called Switcheroo. What this does is toggle between her mini-gun, Pow-pow, to her rocket launcher, Fishbones. Her mini-gun is her basic ability, and stacks 3 times for a whopping 70% of her basic attack speed. When toggling between her mini-gun and rocket, the stacks deteriorates one by one. Switcheroo grants increased attack range and higher damage output. It also has Area of Effect (AoE) damage, which can be useful in clearing waves and attacking enemies from a safe distance during team fights. Keep in mind, though, that this ability does consume mana. 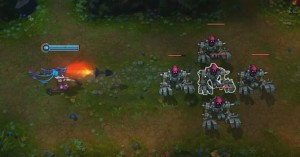 Jinx’s rockets, when used sparingly, are especially helpful during laning phase. When your enemy ADC comes to CS from your minions, use Switcheroo to harass and zone them out. Fishbones is also helpful when the enemy ADC is zoning you out to keep you from CS-ing. Doing a quick wave clear with the rockets instantly raises your CS in a short amount of time.

Knowing the range of your rockets makes it easier for you to gauge whether you can successfully harass enemy ADCs. Make sure that you don’t spam this ability, as you will want to make room for other mana-hungry skills.

In teamfights, you can safely damage enemy teams from a distance. This works best if the enemy champions are clumped together, to maximize your AoE.

Zap fires a laser beam in a straight line after a small amount of time. This slows the target and deals damage. It has a fair amount of range – which you want to take advantage of! 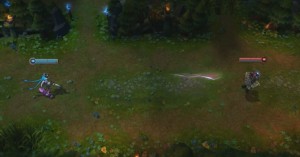 You can use ZAP to poke the enemy team or secure a kill. However, in laning phase, reserve this ability and wait for the opportune time to use it. Remember that this skill does not go through enemy minions. The best way to land ZAP successfully is through movement prediction – trying to gauge where you think your enemy will go to dodge your skillshot.

Another good way to use ZAP effectively is to wait until they’re rooted by your Flame Chompers. After the champion takes damage while rooted, ZAP will work to slow them down, increasing your chances of getting a kill.

League players will know never to face check a bush. This is where we find another use for ZAP. When in doubt, use ZAP on a bush to see if there’s an enemy there. In teamfights, use ZAP to slow and damage from a distance.

Jinx releases three flame chompers which roots the enemy champion down after 1.5 seconds. This is her only ability that deals magic damage. This is also her only escape tool, and is best used with Flash. If you’re trapped by an enemy, a strategically placed chomper can save your life. It can also be used to block pathways if you’re being chased down by an enemy. Unfortunately, this skill has a long cooldown. 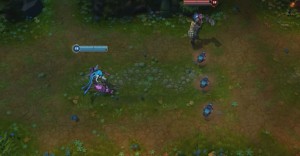 When being chased by an enemy, try to place your chompers somewhat ahead of you. This ensures that either the enemy will be rooted, or they’ll have to go around your chompers to chase you down. When being chased in the jungle, try to run through smaller pathways so you can block them with your snare. This will make enemies think twice before pursuing a chase.

Flame Chompers is great to use if you have a support that’s able to pull enemy champions, like Blitzcrank and Thresh. Once they pull in an enemy champion, you can drop your snare underneath or directly behind them to secure a kill. This also works well with support champions who have a Knock-Up ability, like Alistar and Cho’Gath. In teamfights, use chompers when enemy champions are focusing on an allied champion to help them escape. Remember that your chompers can also be thrown within a considerable range, so if you notice any enemies getting too close to you, try to snare them to secure a kill.

Super Mega Death Rocket is one of the few global ultimates in League of Legends. This is pretty straightforward: it fires a huge rocket and deals AoE damage to the first enemy champion it hits, gaining more damage the farther it travels. Jinx’s ultimate has a lot of execute potential. However, as new those who’ve played Jinx, Ashe and Ezreal would know, ultimates don’t always hit the target. 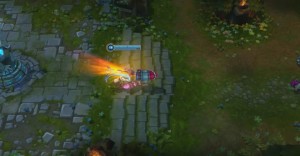 Movement prediction is key to landing your ultimate, if the enemy champion is not within range or sight. Champions like Lucian and Vayne can easily dodge your rocket with their kits, so this is crucial. Along with this, you need to time your ultimate precisely. This is especially true when you’re playing against champions who become untargetable (like Zed with Death Mark and Master Yi’s Alpha Strike).

Jinx’s ultimate can also be a game changer for teamfights with its global reach. This means it’s not necessarily a tool to execute. If you’re a bit behind on a teamfight, or if you’re too far away from your team to free-hit, you can easily send a rocket to lower the enemy team’s health, securing your team kills.

Get excited gives Jinx increased movement speed right after she makes a kill or assist. Taking down inhibitors and turrets will also trigger her passive. Use this to reposition yourself in teamfights, or escape to safety when enemy champions try to focus you. 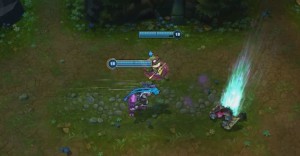 In our next Jinx guide, I’ll teach you how to position properly and recognize when you need to fall back in teamfights.