How to Play in PBE Server | Accounts Needed to PBE Server

Do you want to play on PBE to try new skins, champions  and don’t know how to download the PBE client ?
Don’t worry, we got you!

First we need to download the PBE client installer by clicking here. The installers size is about 100MB.

#1 – After download is completed, go to “Riot Games” folder (“C:\Riot Games”), and put the downloaded file there. 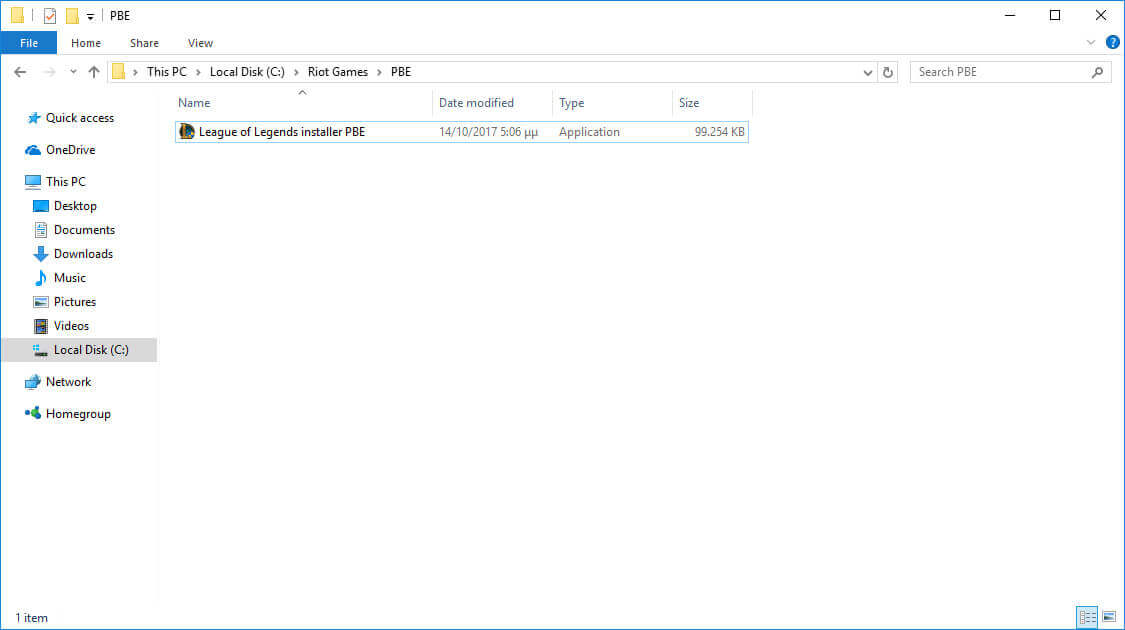 #2 – Now double click the installer and select yes on the next dialog. The installer is now launched. 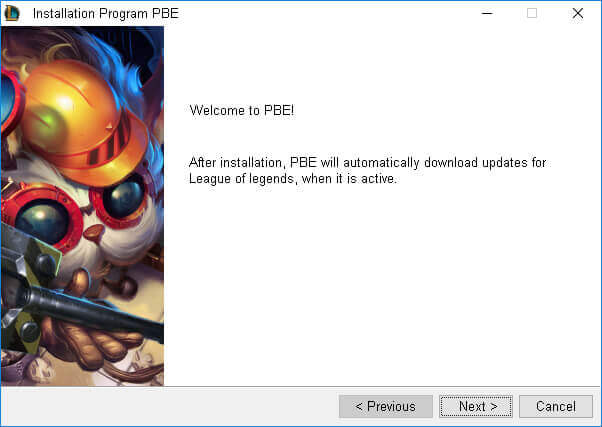 #3 – Press “Next”, then tick “Accept the Terms” and press again next.
Now League of Legends PBE Client is installing on our computer (the installing process will roughly take 1 to 3 minutes depending on your computer).

#4 – After installer completes its job, you will see one last dialog. You either have to tick the box about starting the PBE client now (as shown in the picture below) or untick it to start the PBE Client Later. 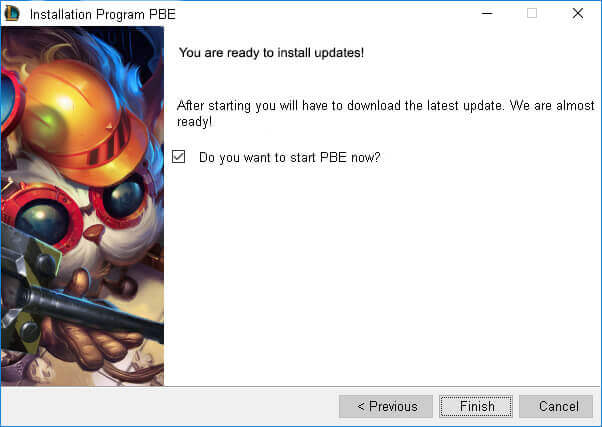 When you open the PBE client from the installed folder (“C:\Riot Games\PBE\LeagueClient.exe”), PBE will begin to download the latest PBE updates.
The first time you are updating your client, you will have to download more than 5GB of data. After that, every PBE update is about 50-200MB.

BONUS Tip:
Create a PBE client shortcut on your desktop by right-clicking your “LeagueClient.exe” which is within the “C:\Riot Games\PBE” folder and click “Send to -> Desktop (create shortcut)”.

Your live League of Legends account must be honor level 3 with no bans or restrictions in order to sign up. Your account can be on any region (except Korea) and any level. You can check your PBE eligibility by logging in here.

You can download the client for PC here and for Mac here. Keep in mind that downloading and installing the client won’t give you access to the PBE. You’ll need an active PBE account to actually log in.

Download links are also located in the page header of the PBE community board.

Do testers have to purchase content or grind levels?

Your PBE account will be leveled up to 30, and you’ll be able to do a repeatable mission for RP. Keep in mind that both new and current content will be available for their in-game prices.

No. PBE accounts are linked to your live account, and sharing either could result in a permanent suspension of both accounts.

What do I do if I forgot my password?

You should receive an email shortly for further instructions. If you still can’t to recover your password, send us a ticket!

Why is my ping so high?

The PBE servers are hosted in Chicago, Illinois in NA, and have a smaller capacity than our live environments. This makes it much easier for us to update the PBE with new content every day. If you don’t normally play on NA, you will likely experience higher-than-normal ping.

How is Player Behavior monitored on the PBE?

We monitor both harassment scores and reports made against PBE accounts, so if you encounter a toxic player in your game please use the report function. Testers exhibiting toxic behavior will have their accounts permanently disabled without warning or the possibility of appeal.

What happens when my honor is reset at the end of the season?

Your PBE account will not be affected when we reset honor levels at the end of a season.

Why is the PBE down?

We add and modify content on the PBE every day based on feedback from testers, so the servers will regularly be taken down for maintenance for an hour or two. During that time the server status is set to “Unavailable” and you will be unable to log in.

Why am I in a login queue?

The PBE is small compared to regional servers, so queues sometimes take longer to populate and you may be matched with players outside of your skill level. There are some community resources to help find people to play with!

Where can I find information on PBE updates?

A summary of live balance changes and new content or features will be posted every patch on the PBE community. Additionally, stickied threads will be created for discussion of new features, champions or remakes. Remember that not everything that hits the PBE makes it to live.

How do I report bugs?

Report bugs using the bug report button in the bottom-right corner of the client. You can also make a post and see other bug reports in the PBE Bugs section of the Boards. If another player has already submitted a report on your bug, comment on their thread instead of creating a new one, to keep the information collected.

Do I have to leave feedback in English?

Feel free to submit feedback and bug reports in any language you prefer! Most developers speak English, so we may not be able to respond in your language, but we’ll work with regional teams as necessary to address non-English feedback.

How can I find other testers on the PBE?

Check out the Boards!

How to Play in PBE PBE Tutorial Requirements in PBE